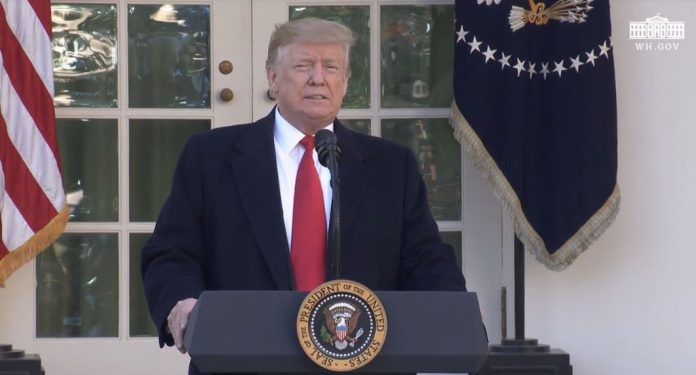 President Donald Trump announced his decision to support a short-term spending bill to reopen the federal government for three weeks. The measure will not include any new funding to build a border wall.

The partial government shutdown is on its 35th day, the longest in the history of the United States. Nine federal departments are closed and impacted around 800,000 federal workers.

The standoff between the Trump and Congress regarding his demand for $5.7 billion in funding to build a wall at the U.S.-Mexico border was the primary reason for the shutdown.

In his remarks at the White House Rose Garden on Thursday, Trump said, “I am very proud to announce today that we have reached a deal to end the shutdown and re-open the federal government.”

“I will sign a bill to open our government for three weeks, until February 15. I will make sure that all employees receive their back pay very quickly or as soon as possible,” the President added.

For weeks, Trump said he will not end the shutdown until he gets his demand for $5.7 billion in border wall funding. He even threatened to keep the shutdown for months or even years.

On the other hand, House Speaker Nancy Pelosi and Senate Minority Leader Chuck Schumer remained firm in their position—open up the government first and then discuss funding for border security. Earlier this month, Pelosi made it clear that there will be no money for the wall in any legislation to end the shutdown.

Trump’s decision to temporary open the government without getting his demand is a victory for Democrats.

The President explained that he made his decision because “Democrats and Republicans are “willing to put partisanship aside” and “put the security of the American people first.”

However, he also warned, “If we don’t get a fair deal from Congress; the government will either shutdown on February 15 again or I will use the powers afforded to me under the laws and the Constitutions of the United States to address this emergency. We will have great security.”

When asked about the possibility that Congress passes legislation without border wall funding, Trump responded, “I have other alternatives if I have to…But we want to go through the system. We have to have a wall in this country.

On January 10, the President recently threatened to use his emergency power to build a wall at the southern border. He said, “We can declare a national emergency. We shouldn’t have to. This is just common sense.”