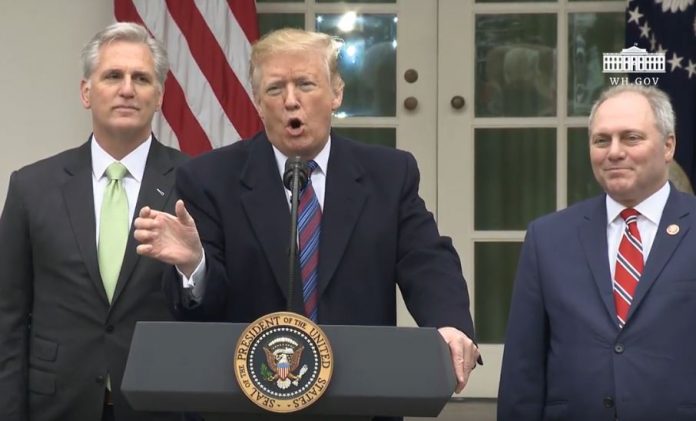 President Donald Trump threatened to keep the partial government shutdown for years until he gets funding for the border wall.

After a meeting with congressional leaders and Trump at the White House on Friday, Senate Minority Leader Chuck Schumer said, “We told the president we needed the government open. He resisted. In fact, he said he’d keep the government closed for a very long period of time, months or even years.”

The president confirmed to reporters that he is willing to extend the partial government shutdown for a long time. Trump said, “Absolutely I said that. I don’t think it will, but I am prepared…I hope it doesn’t go on even beyond a few more days. We could open very quickly.”

Schumer together with House Speaker Nancy Pelosi and other congressional leaders met with Trump at the White House to negotiate a deal to open up the government and resolve their disagreement over border wall funding.

Their negotiations appeared unproductive again. Last Wednesday, the Democrats strongly rejected Trump’s demand for $5.6 billion in funding for border wall. Republican Senate Majority Leader Mitch McConnell said he will not bring to the floor any spending bill that Trump opposes.

Yesterday, the House passed a package of legislation to end the partial government shutdown. The legislation does not include any funding for the border wall and is expected to be dead on arrival in the Senate. Trump is expected to veto the spending bills.

Pelosi called the border wall an “immorality” and a “diversion” by the President to hide what he is doing Medicare, Medicaid, and Social Security in his budget proposal. She vowed, “We’re not doing a wall.”

On Friday, both Democrats and Republicans agree on one thing—they want to open up the government. However, they are not budging on their position on border wall funding.

Additionally, Trump stressed, “We set out a number, $5.6 billion, we’re very firm on a number. We have to get a structure built.

On the other hand, Pelosi said, “We cannot resolve this until we open up government. We made that very clear to the President.”