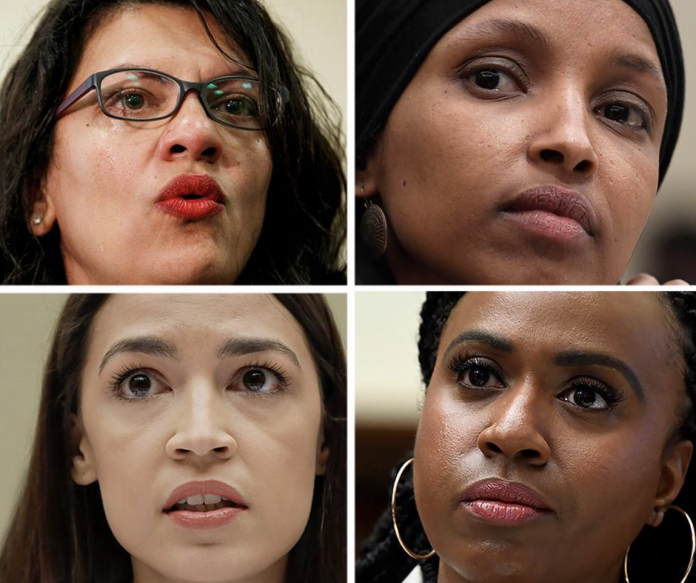 On Sunday, the president posted a series of tweets where he blasted these congresswomen. In the tweets, Trump suggested that the congresswomen “go back” to their “crime-infested” countries, lead these countries, and then show America how “it’s done.” These are statements which critics have branded as racist; however, the president is not backing down.

Earlier today, Trump doubled down on his remarks about “The Squad.”

Trump vs. The Squad

President Trump’s tweets came on Sunday after Tlaib publically vowed to impeach him during a speaking event. It’s worth noting that the left-wing has talked about impeaching Trump since the inception of his presidency. Tlaib also made the comment earlier this year in January after beating her opponent in the 2018 congressional election.

Trump’s subsequent statements about “The Squad” read as follows:

So interesting to see “Progressive” Democrat Congresswomen, who originally came from countries whose governments are a complete and total catastrophe, the worst, most corrupt and inept anywhere in the world (if they even have a functioning government at all), now loudly……

….and viciously telling the people of the United States, the greatest and most powerful Nation on earth, how our government is to be run. Why don’t they go back and help fix the totally broken and crime infested places from which they came. Then come back and show us how….

….it is done. These places need your help badly, you can’t leave fast enough. I’m sure that Nancy Pelosi would be very happy to quickly work out free travel arrangements!

Each of the congresswomen responded to President Trump, alleging that he is racist and unfit to serve in the White House. Additional progressives and Democrats also censured the president and stated that he should apologize. Earlier today, Trump made it clear that he will do no such thing. As a matter of fact, the president published a series of additional tweets to follow up on his previous remarks.

When will the Radical Left Congresswomen apologize to our Country, the people of Israel and even to the Office of the President, for the foul language they have used, and the terrible things they have said. So many people are angry at them & their horrible & disgusting actions!

If Democrats want to unite around the foul language & racist hatred spewed from the mouths and actions of these very unpopular & unrepresentative Congresswomen, it will be interesting to see how it plays out. I can tell you that they have made Israel feel abandoned by the U.S.

The four aforementioned congressmembers have each faced their own share of controversy outside of their spat with President Trump. “The Squad” previously found themselves in dispute with House Speaker Nancy Pelosi.

Pelosi criticized the congresswomen for their lack of votes on a spending appropriations bill and their conduct on Twitter. Ocasio-Cortez later pushed back against Pelosi’s statements, claiming that she shouldn’t be attacking “newly elected women of color.”

However, following President Trump’s tweets from yesterday, the House Speaker did publically defend “The Squad.”

When @realDonaldTrump tells four American Congresswomen to go back to their countries, he reaffirms his plan to “Make America Great Again” has always been about making America white again.

Our diversity is our strength and our unity is our power. https://t.co/ODqqHneyES