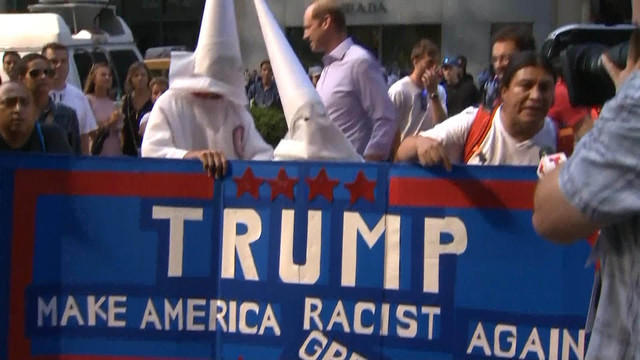 ormer President Trump took questions in a four-hour-long deposition on October 18th. Trump’s deposition was a response to a 2015 lawsuit. The lawsuit was filed by 5 activists who dressed as KKK in front of Trump Tower.

The tactic of being dressed as KKK, to protest was used often, early in the presidential campaign by Democrat supporters.

In this case, a group of protesters filed suit in a New York state court alleging his security guards attacked them. The protest was held outside of Trump Tower during the U.S. presidential election. They named the security personnel, the Trump Organization, and the Trump campaign as defendants.

Trump, who was on the campaign trail, at the time of the incident, says the protestors had only themselves to blame.

“The case should never have been brought, as the plaintiffs have no one else to blame but themselves,” Trump said. “Instead of protesting peacefully, the prosecutors deliberately tried to stir up a crowd by blocking the entrance to Trump Tower on 5th Avenue in the middle of the day, wearing Klu Klux Klan robes and hoods.”

The protestors were a group of Mexican activists. They claim to have been protesting Trump’s comments about Hispanic immigrants. Some of the protesters wore the KKK’s white hoods while holding signs with slogans like ‘Make America Racist Again’.

Trump issued a statement posted to Twitter by his spokesperson Liz Harrington on Monday.

“The Klu Klux Klan dressed protester case should have never been brought as the plaintiffs have no one to blame but themselves. Rather than protest peacefully, the plaintiffs intentionally sought to rile up a.. pic.twitter.com/ZG9OsAgmNE

“After years of litigation, I was delighted to have the opportunity to tell my side of this ridiculous story — another example of unwarranted harassment of your favorite president,” Trump said.

The film capturing the incident shows the Trump Tower security personnel approaching protesters and taking their signs from them. Five of the protestors claim to have been beaten during the scuffle.

“Rather than protest peacefully, the plaintiffs intentionally sought to rile up a crowd by blocking the entrance to Trump Tower on 5th Avenue, in the middle of the day, wearing Klu Klux Klan robes and hoods.”

Trump added that his security staff’s attempts to “de-escalate the situation” were unsuccessful.

“After years of litigation, I was pleased to have had the opportunity to tell my side of this ridiculous story – Just one more example of baseless harassment of your favorite President,” Trump said.

While he was president Trump had immunity from testifying. This was the same immunity given to former president Bill Clinton in the 1990s. Now that his time in office is complete the litigation is going forward.

New York State Supreme Court Justice Doris Gonzalez required Trump to give a deposition in the activists dressed as KKK versus Trump case.