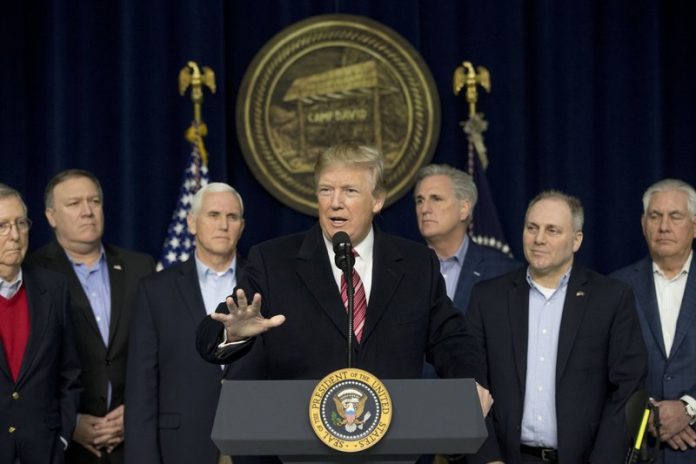 Plainly agitated by a new book portraying him as dysfunctional, President Donald Trump is bemoaning his country’s “very weak” libel laws and making the case that he’s “like, really smart” and, indeed, a “very stable genius.”

Trump defense of his mental fitness in a series of tweets was a singular episode in a presidency rife with moments unlike any that have come before in that office.

He was pushing back against “Fire and Fury: Inside the Trump White House,” which paints him as a leader who doesn’t understand the weight of his office and whose competence is questioned by aides.

“Actually, throughout my life, my two greatest assets have been mental stability and being, like, really smart,” Trump tweeted from Camp David, the presidential retreat in Maryland, a few hours before a strategy session on the 2018 legislative agenda with Republican congressional leaders and Cabinet members.

And when Trump addressed reporters later, the Ivy League graduate was ready for the question.

“I went to the best colleges for college,” said Trump, who holds a bachelor’s degree from the University of Pennsylvania. “I had a situation where I was a very excellent student, came out, made billions and billions of dollars, became one of the top business people, went to television and for 10 years was a tremendous success, as you probably have heard, ran for president one time and won.”

His ire was directed at author Michael Wolff, whose book draws a derogatory portrait of the 45th president as an undisciplined man-child who didn’t actually want to win the White House and who spends his evenings eating cheeseburgers in bed, watching television and talking on the telephone to old friends.

“I consider it a work of fiction,” Trump told reporters. “The libel laws are very weak in this country. If they were strong, it would be very helpful. You wouldn’t have things like that happen where you can say whatever comes to your head.”

He went on: “I don’t know this man. I guess sloppy Steve brought him in the White House quite a bit and it was one of those things. That’s why sloppy Steve is now looking for a job,” Trump said.

In one of his morning tweets, the president said critics are “taking out the old Ronald Reagan playbook and screaming mental stability and intelligence.”

He said his journey from “VERY successful businessman,” to reality TV star to president on his first try “would qualify as not smart, but genius …. and a very stable genius at that!”

Reagan died in 2004, at age 93, from pneumonia complicated by the Alzheimer’s disease that had progressively clouded his mind. At times when he was president, Reagan seemed forgetful and would lose his train of thought while talking.

Doctors, however, said Alzheimer’s was not to blame, noting the disease was diagnosed years after he left office. Reagan announced his diagnosis in a letter to the American people in 1994, more than five years after leaving the White House.

Trump, now 71, was the oldest president ever when assuming office. Reagan was nearly eight months younger.

Trump’s chief of staff, John Kelly, who has tried to bring order to a chaotic White House, said he had not seen the tweets until reporters showed them to him just before Trump spoke about noon.

But he said that Trump didn’t appear angry Friday or Saturday. “I thought he would be, frankly,” Kelly said.

As for the tweets: “He feels he can go around the press and get his perspective out by tweeting,” explained Kelly. “That’s kind of why he does it.”

Chatter about Trump’s mental fitness for office has intensified in recent months on cable news shows and among Democrats in Congress.

“If he was unfit, he probably wouldn’t be sitting there and wouldn’t have defeated the most qualified group of candidates the Republican Party has ever seen,” she said, calling him “an incredibly strong and good leader.”

Trump is set to have his first physical examination as president this coming Friday at Walter Reed National Military Medical Center in Bethesda, Maryland.

This exam does not typically involve having the president undergo a mental health evaluation, as some Democrats have urged.

Rep. Jamie Raskin, D-Md., introduced a bill in April to establish a commission that would study if the president is mentally or physically unable to perform his duties. And in August, Rep. Zoe Lofgren, D-Calif., introduced a resolution urging the vice president and Cabinet to have Trump undergo a mental and physical exam to determine if he’s competent. Neither measure has gone anywhere.

In early December, the House voted overwhelmingly to kill a resolution from a liberal Democrat to impeach Trump. Rep. Al Green, D-Texas, said Trump had associated his presidency with causes rooted in bigotry and racism.

To back his claim accusing Trump of high misdemeanors, Green cited incidents such as Trump’s blaming both sides for violence at a deadly white supremacist rally in Charlottesville, Virginia, and his sharing of hateful, anti-Muslim videos posted online by a fringe British extremist group.

House Minority Leader Nancy Pelosi, D-Calif., and Minority Whip Steny Hoyer, D-Md., said in a statement shortly before the vote that while “legitimate questions have been raised about his fitness to lead this nation,” they argued “now is not the time to consider articles of impeachment.”