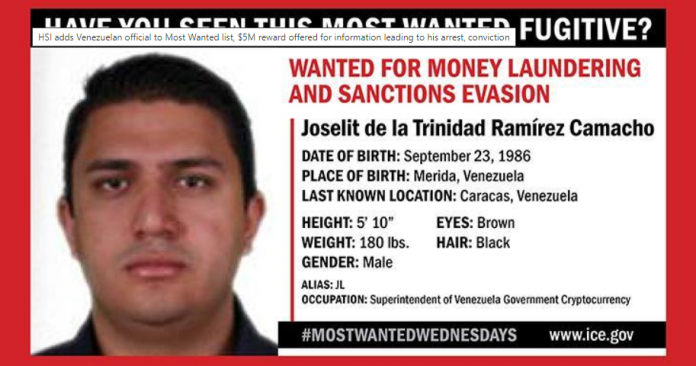 The United States government is offering a $5 million reward for information that will lead to the arrest and conviction of Venezuela’s cryptocurrency chief, Joselit de la Trinidad Ramirez Camacho.

According to the U.S. Immigration and Customs Enforcement’s (ICE) Homeland Security Investigations (HSI) New York, Ramirez Camacho is now included in the agency’s Most Wanted List.

Ramirez Camacho is currently serving as Venezuela’s National Superintendent of Cryptoactive and Related Activities under the Maduro regime.

The U.S. government filed charges against Ramirez Camacho in the Southern District of New York for his alleged involvement in transnational organized crimes such as drug trafficking and money laundering.

Ramirez Camacho has deep political, social, and economic ties to multiple alleged kingpins including Tareck El Aissami. He violated the International Emergency Economic Powers Act, the Kingpin Act, and other sanctions imposed by the U.S. Treasury Department’s Office of Foreign Asset Control (OFAC), according to the HSI.

He allegedly coordinated travel for OFAC-sanctioned individuals and officials of the Government of Venezuela during the re-election campaign of President Nicolas Maduro. Additionally, he allegedly conspired with others to launder payments for the above illegal actions through bulk cash smuggling Caracas, Venezuela to New York, NY.

The U. S. Department of State made the $5 million reward offer under its Transnational Organized Crime Rewards Program to stop the corruption and criminality tied to the Maduro regime.

In a statement, the Department of State wrote, “The Venezuelan people deserve a government that they have chosen freely and whose officials do not conspire with associates to engage in crimes of theft from the people of Venezuela, including money laundering to hide the proceeds of those illicit activities.  The United States is committed to helping Venezuelans restore their democracy through free and fair presidential elections that will provide them with honest and capable national leadership.”