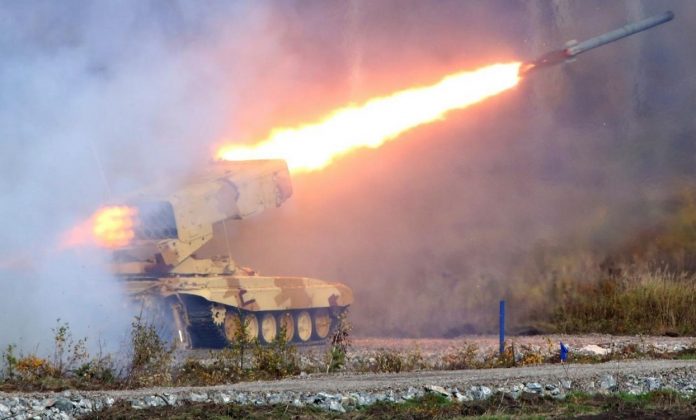 Saturday was a success on all fronts for Ukraine against Russia. According to a report by the Ukrayinska Pravda, over 24 pieces of Russian military hardware and equipment were destroyed. The Ukrainians sent strike aircraft in the successful mission. At least 2 Buratino Solntsepek thermobaric rocket launchers were confirmed destroyed.

Air Force Command spokesman, Yurii Ihnat, posted on Facebook that “The Air Force’s strike aircraft successfully completed its operation on 21 May. At least 12 pieces of the aggressor’s military equipment have been destroyed, including 2 Solntsepek heavy flamethrower systems.”

The update also included that Ukraine is now aggressively intercepting missiles in the air. “The Ruscists once again struck on the territory of Ukraine from the Black Sea with Kalibr cruise missiles. Air Force fighters intercepted and eliminated 2 missiles in the airspace, and the anti-aircraft missile unit eliminated another missile in Vinnytsia Oblast.”

The Solntsepek (Russian for Sunshine) is a TOS-1A mobile multi-barrel rocket launching system being used for urban combat. It has the capability to launch both high-intensity incendiary and thermobaric rockets. The Soviets originally called these mobile launchers “heavy flamethrowers.”

Flamethrowers are used for assaulting fortified positions. And they are built for assault. There has been evidence that they were used during the siege of the Azovstal steel mill in Mariupol.

These launchers can hold up to two dozen 220-millimeter rockets. And they are deadly weapons.  When these warheads land there is a massive explosion which emits a flammable, chemical cloud. And ignites the surrounding air.

A full salvo can decimate an area of 200 x 400 meters. And it kills everything in that area by exploding victim’s lungs, suffocation or burning people and animals in proximity to a thermobaric rocket hit.

Buratinos were originally designed in the 1970s by the U.S.  Russia adopted the design and modified it in the 1980s. The weapon system was first used in combat in 1988 in the Soviet involvement in Afghanistan.

The later TOS-1A is a high-grade TOS-1 which has more range and the capacity to fire more rockets. It has an expanded range of six kilometers or 3.8 miles.

It also features heavier armor on the launcher. The launcher is still the weak spot on the mobile death units.

The Solntsepek is equipped with a laser rangefinder which feeds info directly to the fire control system. This adjusts for the vehicle’s pitch and roll and then provides a firing solution.

The vehicle operator can launch rockets individually, in pairs or as an entire salvo. The launcher has twenty-four rockets at the ready in three rows of eight.

Russia has developed a lucrative niche marketplace. And has sold Solntsepek launchers to several countries. It is popular with customers in the Middle East and North Africa, such as Iraq, Algeria and Syria.