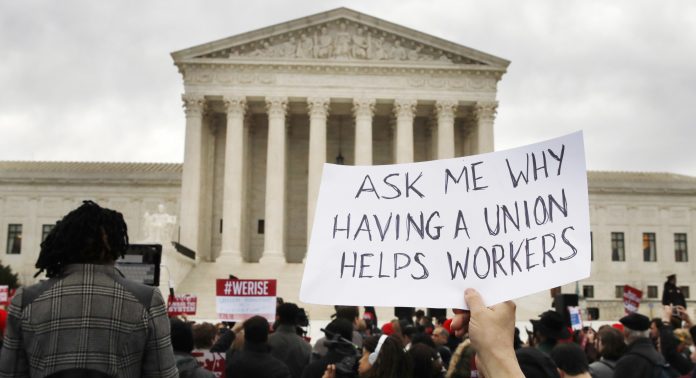 On Wednesday, the Supreme Court ruled that employers can force government employees to contribute to labor unions. This will deal a serious blow to organized labor finances and could weaken unions in general.

The Justices were split 5-4, but they effectively changed a Court decision from 41 years ago. The previous ruling allowed states to force public employees to pay into the unions as their contribution for representation. Since then, many employees have resented the forced payment as a requirement of their employment. Others see little benefit in unions.

The Court said on Wednesday that forced payments violate the 1st Amendment. Unions cannot force employees to pay them because they might not agree with Union politics.

Business-supporting Republicans have long discredited unions, saying that they put an unnecessary burden on business owners. Democrats, however, generally support unions in favor of gaining fair working conditions and wages for the worker.

After the Court announced its decision, President Trump tweeted that the new policy would mean a financial loss for Democrats. He believes that the unions do less to help workers than they do to pay Democratic lobbyists.

Elena Kagan is one of the Justices who voted against the decision. She says that the new policy will prevent workers from making choices about the conditions in their workplace.

Effects of the Decision

Not all states required government employees to pay into unions. The decision will, however, affect about half of states and a total of over 5 million workers.

A study by Robert Bruno and Frank Manzo concluded that approximately 700,000 public sector union members will leave their unions. Manzo works for the Illinois Public Policy Institute. Bruno is a professor at the University of Illinois at Urbana-Champaign.

They also said that the loss of members would weaken the unions’ political influence. They further believe that employers will be less likely to offer raises and higher starting wages with employees not having to pay unions.

Many unions fear what this mean for private sector industries. Now that the precedent is set, they fear that an employee who refuses to pay union dues will succeed in making the requirement illegal.