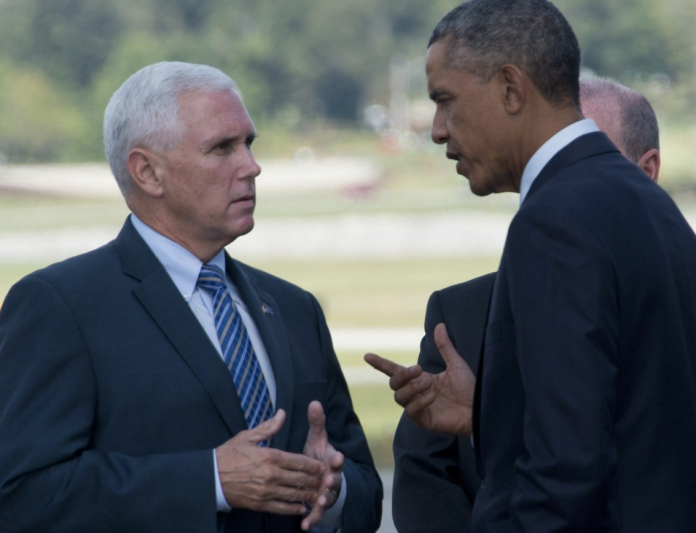 Pence’s interview is scheduled to air later today. During his sit-down with Fox News’ Chris Wallace, the vice president shared his thoughts regarding Obama’s condemnation of Trump.

“The truth is, the American people in 2016 rejected the policy and direction of Barack Obama when they elected President Donald Trump,” began Pence.

“It was very disappointing to see President Obama break with the tradition of former presidents,” Pence said. “[He became] so political and rolled out the same tired argument that he and liberals have made over the last eight years.”

The 44th president has not publicly responded to the excerpts from Pence’s Fox News interview.

A Backstory Regarding Pence’s Statements

On Friday, Obama slammed the current president during a speech at the University of Illinois at Urbana-Champaign. The former commander-in-chief lamented Trump’s alleged “capitalizing” on political anger and resentments. Obama also criticized the president’s expectations of Attorney General Jeff Sessions. The importance of elections and voting, and determining the principles of America were other key points of Obama’s speech.

Shortly after the 44th president’s remarks, Trump fired back. He claimed that he dozed off during Obama’s speech. He also slammed Obama for urging Americans to “remember when this recovery started.” The former commander-in-chief cited 2015 and 2016 as the years when job numbers surged.

“I’m sorry,” Trump said. “I watched it, but I fell asleep. I found he’s very good — very good for sleeping.

“He was trying to take credit for this incredible thing that’s happening to our country.”