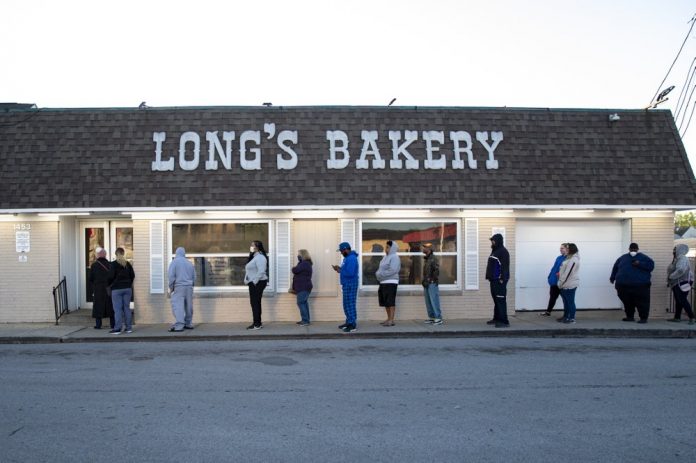 Millions of workers worldwide marked international labor day on Friday trapped between hunger and fear — struggling without jobs or worried they don’t have enough protections against the coronavirus as more countries and states reopen for business.

Beijing’s Forbidden City, the imperial palace turned museum that is one of China’s biggest tourist attractions, started welcoming visitors again, and Bangladesh began reopening factories, as world leaders try to salvage their battered economies without causing a resurgence of the virus that has killed over 230,000 worldwide.

It was a melancholy International Workers’ Day for garment workers across Southeast Asia such as Wiryono, a father of two in Indonesia’s capital, Jakarta, who was laid off last month as retailers slashed orders. His side gig delivering coffee dried up, too, amid a virus lockdown. So he set up a clothing repair business to make ends meet.

“I don’t earn as much as I got from the clothing factory. But I have to feed my wife and kids every day,” said Wiryono, who goes by only one name.

A government-ordered lockdown couldn’t extinguish the May Day protest spirit in Greece, where demonstrators lined up 2 meters (6 feet) apart in careful rows in Athens’ Syntagma Square. Organizers in masks and gloves used tape measures and large colored squares to set out exact positions for the protesters.

Greeks who work by making deliveries staged a motorized protest, driving through Athens on their motorbikes, and police were out in force to ensure residents didn’t head from cities to the countryside, another May Day tradition.

“We are praying for all workers, so that no one will lack work and all will be fairly paid and can enjoy the dignity of work and the beauty of rest,” Pope Francis said at a private morning Mass.

In Spain, a huge field hospital that symbolized the country’s desperate battle against the virus held a ceremonial closing. Dozens of health workers shouted “Public Health!” and “We Want Tests!”

Nearly 40,000 Spanish health workers have contracted the virus, in part because of a scarcity of tests and protective clothing that forced many doctors and nurses to make suits out of garbage bags and other everyday products.

May Day labor protests started in the 19th century in the United States, where this week the number of Americans filing for unemployment benefits surpassed a staggering 30 million — and joblessness in April could hit numbers not seen since the Great Depression of the 1930s.

Essential workers were expected to strike around the U.S. on Friday to demand safer conditions, while other groups organized rallies to protest stay-at-home orders they say are crippling the economy. The nation’s death toll was put at more than 60,000.

Governors are weighing just how far they should go in easing stay-at-home orders. In the hardest-hit corner of the U.S., New York Gov. Andrew Cuomo said schools and colleges will remain closed through the rest of the academic year.

In much of Colorado, people could get their hair cut and shop at stores again beginning Friday, though stay-at-home orders remained in place in Denver and some surrounding counties. Wyoming allowed barbershops, nail salons, gyms and daycare centers to reopen.

Louisiana restaurants added open-air tables 10 feet apart after getting the go-ahead to seat people outside only, though without waiter service. In Maine, golf courses, hairdressers and dentists opened.

In Mandeville, outside New Orleans, the Chinese restaurant Trey Yuen moved a few tables from its dining room to near its koi pond and waterfall garden. “I know people want to get out of the house now, after being cooped up. It’ll be a safe way to do it. I hope,” manager Mandy Perrilloux said. 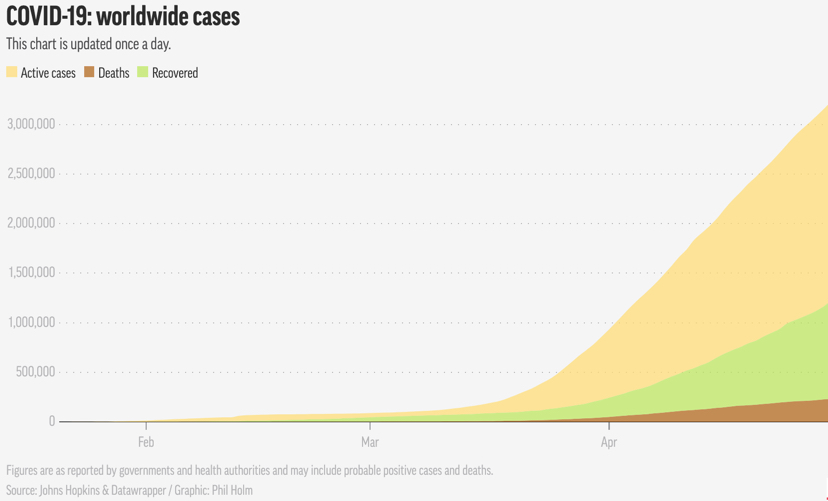 Jenna Kramer, owner of In-Laws Cajun Specialties in the town of Iowa, Louisiana, said outdoor seating will be nice for truck drivers, who will no longer have to eat in their rigs.

Lacey Ward, an Omaha hairstylist, said she is worried that the Nebraska governor’s decision to let salons reopen on May 4 could put her and her family at risk. She would prefer to collect unemployment until the danger subsides.

“I feel like we are literally the guinea pigs in this situation,” she said.

May Day is a state holiday in many countries, but lockdowns mean this is the first time that Russia — whose prime minister has the virus — will not hold mass demonstrations on Red Square.

In Turkey, police and protesters wearing masks faced off in Istanbul, and 15 people were detained for defying confinement rules.

In the Czech Republic, people honked horns, played drums or shouted at midday in a special “noisy protest” over the government’s handling of the crisis.

A holiday atmosphere enlivened South Africa’s streets, as May Day was also when the country began easing its strict lockdown. People were permitted to walk outside for exercise, and some returned to work.

The country where the coronavirus first erupted also continued opening up again: All tickets for China’s majestic Forbidden City were sold out for the May 1-5 holiday, though attendance was limited to 5,000 visitors a day, down from the earlier maximum of 80,000.

Visitor Bian Jiang reveled at the chance to visit without huge crowds and said, “When walking in some areas without others around, I felt like I’m getting back to history.”