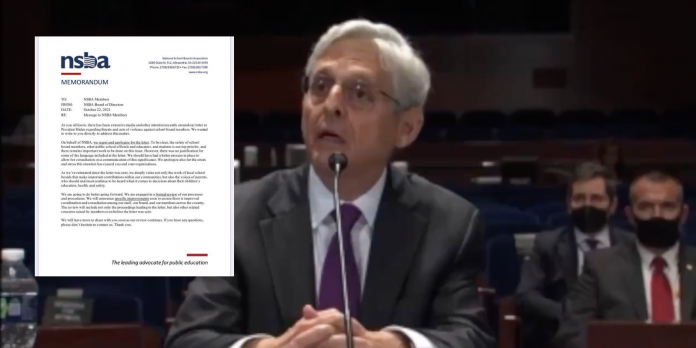 The National School Board Association aka the NSBA collaborated with the White House prior to publishing a letter to President Joe Biden. The letter compares parents to “domestic terrorists.”

And calls for the Feds to get involved in local school boards to target unruly participants in school board meetings.

Within days, Attorney General Merrick Garland directed the Department of Justice to create a national security task force to determine how “federal enforcement tools can be used” to mitigate the “threats”.

The letter was addressed to Joe Biden. It was publicly released on Sept. 29. The letter requested the assistance of the federal government, including the FBI and Department of Justice. The NSBA wants the feds to start dealing with parents who are allegedly being unruly at local school board meetings.

“America’s public schools and its education leaders are under an immediate threat. The [NSBA] respectfully asks for federal law enforcement and other assistance to deal with the growing number of threats of violence and acts of intimidation occurring across the nation,” the letter reads.

“As these acts of malice, violence, and threats against public school officials have increased, the classification of these heinous actions could be the equivalent to a form of domestic terrorism and hate crimes.”

The letter was a collaboration with the White House

The Parents Defending Education obtained emails. The emails reveal that NSBA Interim CEO Chip Slaven and NSBA President Viola M. Garcia sent the letter to the White House without the approval of the NSBA board.

And the nation’s largest school board association was in communication with the White House for “several weeks” before the letter was forwarded to Biden.

According to the emails, the White House was asking for additional information on “specific threats.”

The letter condemned by others in NSBA

John Halkias, NSBA Director of the Central Region, condemned the letter. And says it “took a stance that went beyond what many of us would consider being reasonable and used terms that were extreme.”

Nicole Neily, the president of Parents Defending Education, said in a press release that the NSBA launched a “smear campaign” against parents.

“Rather than focusing on educating our kids, the senior staff [at the NSBA] have launched a smear campaign against parents nationwide,” Neily claims. “It’s now time for the board of the NSBA to regain control or be tarred with the consequences of this outrageous letter.”

The National School Boards Association issued an apology for the letter on October 22.

“As you all know, there has been extensive media and other attention recently around our letter to President Biden regarding threats and acts of violence against school board members,” the NSBA wrote in a memo. “We wanted to write to you directly to address this matter.”

“On behalf of NSBA, we regret and apologize for the letter,” the NSBA said, noting that “there was no justification for some of the language included in the letter.”

The fallout of letter and DOJ actions

On Thursday, Garland denied that the DOJ would label parents as domestic terrorists. He says the “Justice Department supports and defends the First Amendment right of parents to complain as vociferously as they wish about the education of their children, about the curriculum taught in the schools.”

“That is not what the memorandum is about at all, nor does it use the words ‘domestic terrorism’ or ‘PATRIOT Act,’” Garland said when questioned by Congress.

Educational groups, state school boards, and members of the U.S Commission on Civil Rights are criticizing the administration for issuing the NSBA letter. And the DOJ for responding to it without any real evidence.

In a letter to Garland, half of the eight members of the Commission on Civil Rights requested “specific examples” of “harassment, intimidation, and threats of violence.”  They also accuse Garland of “conflicts of interests” with his son-in-laws’ business of critical race education.

What is the NSBA?

The National School Board Association is one of the best-funded lobby groups in the United States. They are highly political. And are advocating the most extreme left agenda. The NSBA is calling for the “Transformation of Public Schools Now.” They are against school choice. And their website has a downloadable pdf named “Recommendations to the Biden/Harris Administration.”

In the meantime, the Biden administration still seems to be targeting some parents who are concerned about their child’s school curriculum.

Based on the fact that the US Attorney General jumped so quickly to accommodate the NSBA it is possible that this may be the most politicized administration in recent memory.