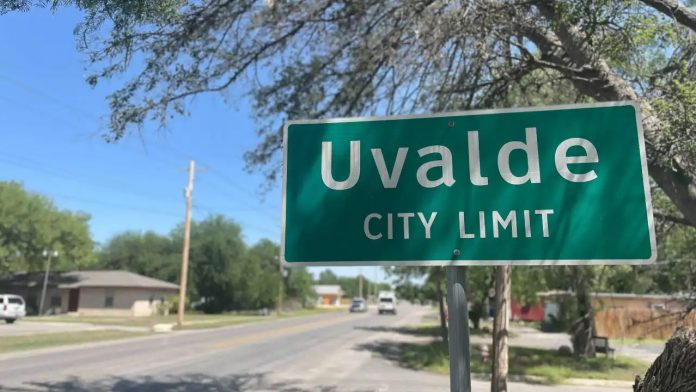 On Thursday night at about 5:30 pm, two people were shot at the Uvalde Memorial Park just outside of Uvalde, Texas. According to Uvalde police, the shooting was the result of rival gangs fighting which escalated.  Four suspects have been arrested.

The park is located at 401 E. Main Street, which is less than a mile and a half from Robb Elementary. In May, the nearby school was the scene of a deadly shooting where 19 students were killed along with two of their teachers.

According to police, the shooting victims were an 18-year-old and a 16-year-old. Both were airlifted to a San Antonio hospital.

On Friday authorities report that both are still hospitalized. The 18-year-old is stable. And the 16-year-old is in critical condition.

The four people in custody in connection with the shooting were arrested when they showed up at a local Uvalde hospital for treatment of injuries suffered in the gang altercation.

Police say that one of the suspects is a juvenile male who is being held in a juvenile detention facility in Del Rio, Texas.

The suspects below have been identified and are being charged.

Donavan Hill, 17 — 9 counts of engaging in organized criminal activity and aggravated assault with a deadly weapon.

Karlyn Alexandrya Valdez, 22 — 3 counts of engaging in organized criminal activity, aggravated assault with a deadly weapon, and endangering a child.

Brandon L. Alba, 18 — remains hospitalized in San Antonio due to injuries. His arrest warrant will be served after he is released from the hospital. He will be charged with 9 counts of engaging in organized criminal activity and aggravated assault with a deadly weapon.

Unnamed 16-year-old juvenile — 9 counts of engaging in organized criminal activity and aggravated assault with a deadly weapon. It has not been determined if he will be charged as an adult.

Texas Governor, Greg Abbott has sent the Texas Dept. of Public Safety to assist the Uvalde PD and the sheriff’s office in their investigation. And to try and curtail local gangs.

The shooting also prompted a brief evacuation for the Uvalde Together Resiliency Center approximately 3 miles from where the shootings took place at Uvalde Memorial Park.

The Center offers free services and is open Tuesday through Saturday from 11 a.m. until 7 p.m. Confidential counseling sessions are available. Call 830-276-1369. The Center also has art and music therapy. And accepts walk-ins depending on counselor availability.