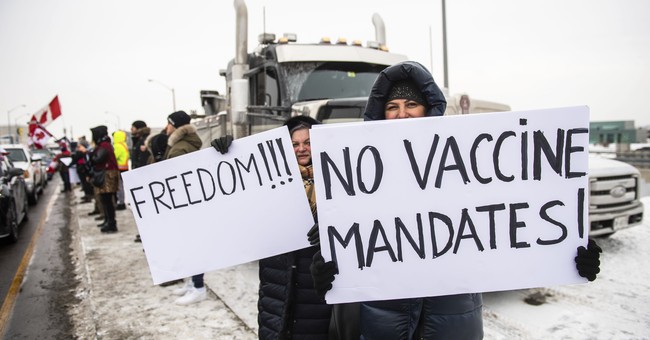 Canadian Prime Minister Justin Trudeau on the suggestion of US President Joe Biden is using his federal powers trying to stop Canada’s Freedom Convoys 2022.  And Freedom Fighter Nation reported that approximately 38,000 Canadian truckers walked off the job due to the protests.

A Canadian judge ruled that police can block and remove the demonstrators. And police dispersed the Canadian Freedom Convoy on the Ambassador Bridge.  The COVID-19 protestors shut down the bridge linking Detroit to Canada for a week. And this is the nation’s largest border crossing.

The US pushed Canada to shut down the protests. According to the Detroit News, Michigan Governor Gretchen Whitmer, a Democrat, blasted the “Freedom Convoy” as “an illegal blockade.” Michigan Republican former Detroit police Chief James Craig is looking to unseat Whitmer in the upcoming election. On Friday he backed the truckers accusing Whitmer and President Biden of “demonizing the truckers.”

Former President Donald Trump, as well as other U.S. Republican leaders, have been vocal in their support of the Canadian protesters. Trump, speaking Saturday, said he was proud to see many of the protesters waving Trump banners.

“You can push people so far and our country is a tinderbox too, don’t kid yourself,” Trump said. “And there are plenty (of people from) our country up there right now.”

On Saturday, Canadian authorities wearing neon yellow vests over their uniforms confronted the demonstrators. They warned over a public address system that they were going to be arrested if they didn’t disperse.

Many protesters in pickups left voluntarily. And there was loud honking as they drove away. The larger trucks left a short time later. blasting their air horns as they went.

Most protestors heeded police warnings that vehicles could be seized. “Once a vehicle is seized, it may be detained and, following a conviction, possibly forfeited,” the statement said.

And on Sunday, they began arresting the truckers who were still attempting to block the bridge. Police said the last vehicles were being towed away.

“Enforcement will continue in the demonstration area and there will be zero tolerance for illegal activity,” Windsor, Ontario, police tweeted. “The public should avoid the area.”

One lane was clear and open on Sunday.

Trudeau and the US authorities all claim the bridge closure has severely hampered the U.S.-Canada trade. And even with a one-week closure, they claim the auto industry to scale back production in both countries.

“It’s not the end,” protestor Kim Deon said. “What happened here in the last week is showing the world and showing the rest of the country that, you know what, this needs to be done to stop what’s going on in our country.”

Protests at the bridge, as well as, elsewhere in Canada have triggered similar protests globally. And convoys and protestors locked up traffic in many countries including New Zealand, France, and the Netherlands.

In Wellington, the New Zealand capital, demonstrators have set up camp on the grounds of the country’s parliament. And gathering on the streets surrounding the statehouse.

According to Radio New Zealand (RNZ), police blasted out music through loudspeakers at eardrums damaging volumes.

They were trying to drive off protesters. In an unusual tactic, the protesters were treated to Barry Manilow, James Blunt, and the Spanish dance track “Macarena” by the band Los del Río.

The protesters responded with jeers. And began to play the 1984 song “We’re Not Gonna Take It” by American band Twisted Sister. And it was Canadian truckers who first adopted the song as an anthem.

French authorities tried to intercept vehicles entering the city for protests. And at least 500 automobiles were turned away.

Despite the French ban on Freedom Convoys 2022, some protestors converged on Champs-Elysees in the center of the capital. And attempted to block and disrupt block traffic.

French police began removing demonstrators and towing away trucks and cars. Paris police used tear gas to disperse them. And 14 people were detained.