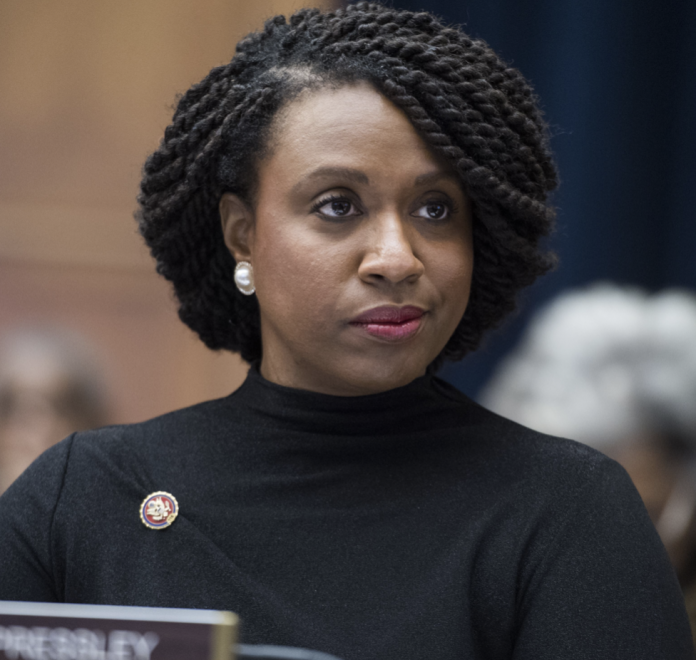 On Monday, House caucus members Ayanna Pressley, Alexandria Ocasio-Cortez, Rashida Tlaib and Ilhan Omar held a press conference. The conference occurred in response to very critical tweets which President Trump published over the weekend. In the aforementioned tweets, Trump slammed the four congresswomen, a.k.a. “The Squad.”

Ultimately, the president stated that these caucus members should return to their countries of origin, improve the state of these countries and then come back to America. “The Squad” and other Democrats subsequently branded President Trump as racist.

During yesterday’s press conference, Rep. Pressley stated that she will never refer to Donald Trump as president of the United States.

Why Won’t Pressley Refer to Trump as the President?

By her own admission, Pressley believes the commander-in-chief lacks the proper values of a United States president. The congresswoman stated this outlook as the reason behind her refusal to refer to the president as the president.

In Pressley’s own words:

“We are grateful for your solidarity, your encouragement and your support in the face of the most recent xenophobic, bigoted remarks from the occupant of our White House. I will always refer to him as the occupant as he is only occupying space. He does not embody the grace, the empathy, the compassion, the integrity that that office requires and that the American people deserve.”

The president has faced immense backlash since his tweets about “The Squad.” In spite of this censure, Trump isn’t backing down whatsoever. As a matter of fact, the president has further elaborated, taking to Twitter to explain himself and his positions on Reps. Pressley, Ocasio-Cortez, Tlaib and Omar. Trump also denied claims that he is racist.

Our Country is Free, Beautiful and Very Successful. If you hate our Country, or if you are not happy here, you can leave!

Those Tweets were NOT Racist. I don’t have a Racist bone in my body! The so-called vote to be taken is a Democrat con game. Republicans should not show “weakness” and fall into their trap. This should be a vote on the filthy language, statements and lies told by the Democrat…..

…..Congresswomen, who I truly believe, based on their actions, hate our Country. Get a list of the HORRIBLE things they have said. Omar is polling at 8%, Cortez at 21%. Nancy Pelosi tried to push them away, but now they are forever wedded to the Democrat Party. See you in 2020!

Despite the statements from President Trump, his critics continue to refer to him as a racist. Certain right-wing figures, such as Sen. Lindsey Graham, encouraged the president to focus on criticizing the congresswomen on their policies. Trump, however, claims that the words and action of “The Squad” convinced him that they harbor hatred for America.

The Democrat Congresswomen have been spewing some of the most vile, hateful, and disgusting things ever said by a politician in the House or Senate, & yet they get a free pass and a big embrace from the Democrat Party. Horrible anti-Israel, anti-USA, pro-terrorist & public…..

…..shouting of the F…word, among many other terrible things, and the petrified Dems run for the hills. Why isn’t the House voting to rebuke the filthy and hate laced things they have said? Because they are the Radical Left, and the Democrats are afraid to take them on. Sad!

Reps. Pressley, Ocasio-Cortez, Omar, and Tlaib have ongoingly censured the president and called for his impeachment, even prior to last weekend’s tweets.