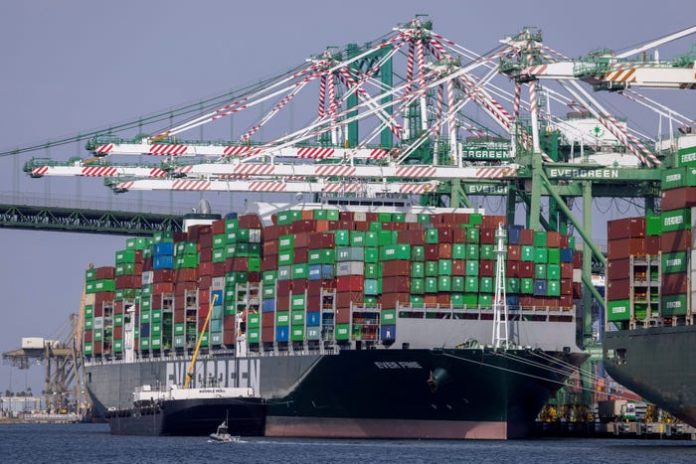 The Marine Exchange of Southern California confirms today that 105 vessels are anchored waiting to enter Los Angeles and Long Beach ports. 77 of them are container vessels loaded with thousands of units of imported goods. And as the backlog continues its impact on the nation’s grocery store shelves is visible. #EmptyShelvesJoe is still trending.

President Joe Biden doesn’t have a “near-term” answer for skyrocketing inflation or shortages caused by the backlog at the ports.

Earlier this month Biden announced that both facilities were moving to around-the-clock work schedules. During a CNN town hall with Anderson Cooper last week, Biden also said he would “absolutely, positively” consider having the National Guard help clear the jam at the California ports.

“So, would you consider the National Guard for trucking?” Anderson Cooper asked. “Because there’s a lot of problems with not enough truck drivers right now.”

“So, are you actually talking about having National Guardsmen and women driving trucks?” Cooper asked.

“The answer is yes,” Biden insisted, “if we can’t move the….increase the number of truckers, which we’re in the process of doing.”

After the interview, the White House walked the president’s answers back claiming. “We are not actively pursuing the use of the National Guard on a federal level.”

No one is certain when, or if, any Biden directive will take effect.

Although there is a backlog at most of the US’s ports, the logjam is worse at the two largest (Los Angeles and Long Beach) where 1/3 of all goods come through.

The 105 stalled ships are up from 96 in the same situation on Tuesday of last week.

When the ships are unloaded in the ports, there is a shortage of truckers waiting to get the containers removed from the docks. The Washington Post reported Tuesday that nearly half of the 2,000 available appointments for truckers at APM Terminals’ Pier 400 in Los Angeles went unfilled on Friday.

Officials in both ports made announcements of emergency measures they are taking to begin Nov. 1.

If cargo is not removed timely, the carrier will be fined. A fine of $100 for each container scheduled for rail transport that remains on the dock for more than three days. Carriers will have nine days to move any truck-bound cargo before the fee kicks in.

“With the escalating backlog of ships off the coast, we must take immediate action to prompt the rapid removal of containers from our marine terminals,” Port of Long Beach Executive Director Mario Cordero said. “The terminals are running out of space, and this will make room for the containers sitting on those ships at anchor.”

Long Beach recently temporarily modified its zoning laws to help the port to offload freight. For the next three months, warehouses and industrial sites can stack shipping containers four-high rather than two. They are providing carriers with more space as they wait for truckers to pick it up.