Home America A Call To Action: Hillary Clinton Must Be Imprisoned For Her Crimes
SHARE 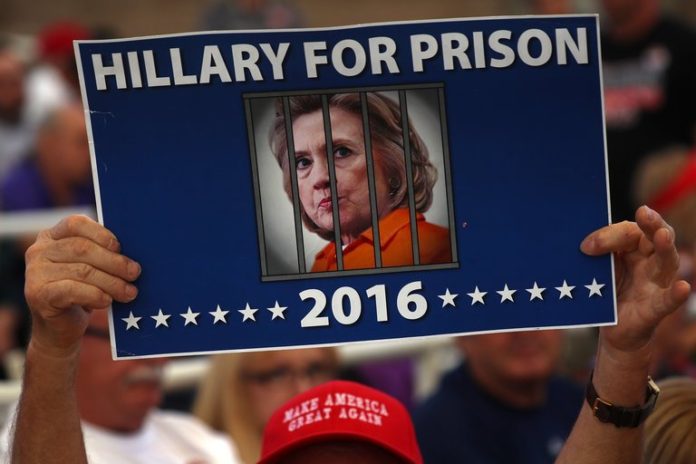 It is imperative for Hillary Rodham Clinton to be held accountable for the plethora of crimes she has committed over a period of decades.

First and foremost, Clinton has engaged in the commission of crimes for longer than many people have been alive. She has flagrantly engulfed herself in countless scandals and pay-to-play politics. Moreover, Clinton’s smug, arrogant demeanor and attitude are utterly disgraceful.

Perhaps one of the biggest Clinton crimes of all is her collusion with the DNC to rig the primaries against her then-rival Bernie Sanders. According to reports from Fox News, Clinton likely breached several laws by paying a British spy and the Russian government to secure a damning Trump dossier.

For months, Clinton has refused to take responsibility for the role she played in her downfall. Instead she has chosen to play the victim and scapegoat everyone from President Trump to Russia to James Comey. It was Clinton’s own conduct that engendered her loss. Rigging the primaries against Sanders was highly unethical. However, willfully paying foreign entities for dirt on a political opponent violates many laws. Clinton ought to be ashamed of herself.

Other dastardly crimes committed by Hillary Clinton include, but are certainly not limited to, the collusion with her husband Bill to keep illegal files on Republicans, the deletion of 30,000 emails, and the existence of the infamous Clinton body count. Attorney General Jeff Sessions has a moral and legal obligation to investigate the aforementioned wrongdoings.

Although most Americans are somewhat aware of the email deletions and Clinton body count, many lack knowledge of the Clinton’s illegal surveillance of Republicans. This scandal, known as ‘Filegate,’ consisted of Bill and Hillary Clinton using illegal means to secure 900 FBI files on GOP opponents. An excerpt from Judicial Watch findings reads as follows:

“In an effort to discredit the women who charged President Clinton with sexual misconduct, personal files and papers were illegally obtained and released. The courts found, under the Privacy Act, that the privacy of Linda Tripp and Kathleen Willey had been violated.”

Despite the Clinton’s work to conceal their involvement in Filegate, the evidence is readily apparent.

Following Filegate comes the deletion of 30,000 emails. Clinton’s decision to essentially defraud the government simply serves as further proof of her ultimate corruption. To make matters worse, she and her husband directly interfered with the FBI’s investigation into her email scandal. Bill Clinton met with then-Attorney General Loretta Lynch in an airplane tarmac shortly before Mrs. Clinton’s exoneration. Why is this being accepted? When will Clinton be held accountable?

Yet another disturbing element surrounding Hillary Clinton is the Clinton body count. Despite the lack of investigations into the matter, people who engage with, or worse, speak out against the Clintons tend to end up dead. Reporter David Bresnahan provided the following account in 1997:

“I started looking into all the various deaths of people involved in various Clinton scandals. I started to investigate the entire picture instead of just one focused event. Nobody out there was putting it all together. If you look at one scandal, you’ll find one dead guy.”

It is very important to hold Hillary Clinton accountable for her crimes. This has to happen in a court of law. Moreover, the Trump administration must take certain precautions to ensure that Clinton does not buy off people who can prosecute her. Illegal surveillance, the deletion of government emails, election rigging, etc are only the tip of the iceberg. How many Clinton crimes remain hidden?

Holding Hillary Clinton accountable was one of President Trump’s promises to the American people. His appointed Attorney General Jeff Sessions must now do his job. After all, if Hillary Clinton doesn’t have to follow the law, why should any other American? It is high time for the restoration of law and order.

What are your thoughts? Let us know in the comments below…