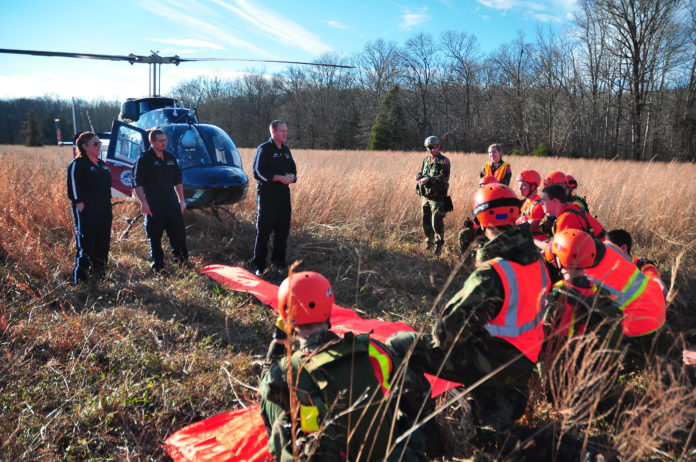 Search and rescue missions are the bread and butter of the Civil Air Patrol (CAP). This non-profit organization is an auxiliary of the United States Air Force and is filled with civilians who love to fly and help people. CAP missions are assigned by First Air Force with the largest number of them related to FEMA efforts. They also provide pictures in the event of floods and forest fires to Incident Commanders and FEMA officials. The organization provides assistance with disaster-relief missions, search-and-rescue missions, and emergency service missions. The emergency missions are assigned by Congress. Civil Air Patrol members also get to help Homeland Security and the American Red Cross. Along with providing emergency services, the Civil Air Patrol also provides education services for the general public as well as cadet programs for teens who are interested in learning about flying. There are currently 56,000 people who participate in numerous ways within the CAP.

This group is filled with unsung heroes who have helped people all over the world. When the United States Air Force at Tyndall Air Force is called upon for Search and Rescue missions, the Civil Air Patrol is involved in 75% of them. Along with helping the team in Florida, the Civil Air Patrol also works outside of the continental US in Alaska, Hawaii, and Puerto Rico. Approximately 100 people are saved annually by Civil Air Patrol pilots. The CAP has been providing rescue assistance since December of 1941, so for the 76 years that the CAP has been flying, thousands of people have been rescued.

While search-and-rescue missions provide obvious examples of the good things that the Civil Air Patrol does for people around the world and in the United States, it is the behind-the-scenes activity that most people are unaware of. As former veteran, Mike Fassi puts it “When humanitarian aid is needed, the CAP gets called on for support. The CAP was heavily involved in assisting the first responders during the attacks in New York City on September 11, 2001”. Since the CAP is an auxiliary of the Air Force, pilots were given permission to fly over the World Trade Center to photograph the devastation. The CAP was also involved in delivering Red Cross aid for those living near the World Trade Center. Fassi took over the Thompson Valley Composite Squadron as Commander on October first, 2001 and was responsible for 65 senior members and 50 cadets and 2 of the 16 aircraft CAP had stationed throughout Colorado.

Since the World Trade Center attacks in 2001, the CAP has helped government agencies with planning and preparation to maintain safety and security. The Civil Air Patrol fleet is often used by Air Force pilots during training events, especially when Air Force pilots need training in high-speed intercepts in airspace where other pilots are not allowed to fly. Citizens of the United States truly benefit from having the Civil Air Patrol to help with rescue missions, humanitarian missions, and educational programs. With the Air Force dedicated to other mission, the CAP also gets involved in maintaining and supporting communication services, surveying low-altitude routes, and transporting officials and time-sensitive supplies.

Providing Assistance after Hurricanes and Tornados

When parts of the United States are impacted by damaging weather, the Civil Air Patrol is one of the first groups to respond. In coastal areas of Florida and Mississippi, the Civil Air Patrol arrives quickly to assist with disaster relief after hurricanes. The Civil Air Patrol also helps people in the Plain States when tornadoes strike. The pilots bring in emergency aid and take aerial photographs for officials to assess the damage. They also bring in the donations from relief organizations around the country. In 2004, Florida was heavily damaged by Hurricane Charley, the CAP provided help in Port Charlotte and the surrounding areas.

Unfortunately, most people are completely unaware of the work that the Civil Air Patrol does. It is time to change this. More media outlets need to cover the Civil Air Patrol to share the good things that this organization does in the United States and around the world. Once people learn about the good things that the CAP does, it is safe to say that more will sign up and participate in this volunteer organization. It does not matter if people can fly or not, the CAP is open to United States citizens who want to help those who need it the most.

The people who join the Civil Air Patrol do not do it for the applause. They do it to help people. In fact, to be a member of the CAP, there is an annual due that must be paid. This is how dedicated to helping others the members of the CAP are. As Fassi put it, “The people who give their time to the CAP are the real definition of heroes as they leave their homes and families to help people that they do not know”. The beauty of this group is that anyone can join, even if they have no military experience and if they do not fly. Each Civil Air Patrol squadron meets about 2 ½ hours each week and they organize summer and occasional weekend activities, too.