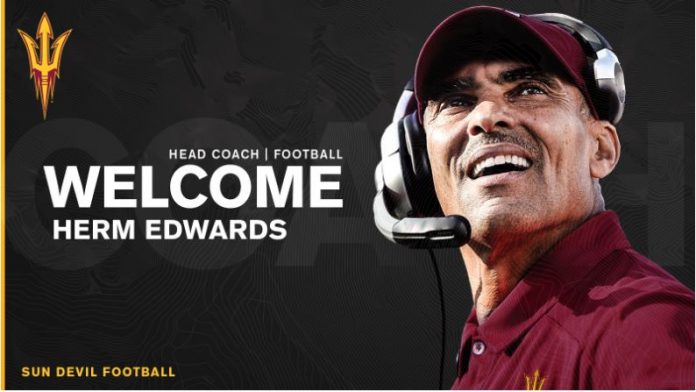 Former NFL coach and ESPN analyst Herm Edwards is the new head coach of Arizona State University’s (ASU) Sun Devil Football team.  He met the university’s officials about the job over the weekend.

On Sunday, Arizona State and its vice president for athletics Ray Anderson confirmed the hiring of Edwards.  He will be the 24th head coach of Sun Devil Football. The Arizona Board of Regents is yet to approve his position.

Since 2009, Edwards serve as NFL analyst for ESPN where he appeared primarily on NFL Live, Sports Center, and ESPN Radio. He also appeared on the networks coverage of the Super Bowl week.

Edwards previously served as coach at the Under Armour All-American game for eight years. He also worked as cornerback for 10 seasons in the NFL between the Philadelphia Eagles, Atlanta Falcons and Los Angeles Rams.

For 18 years, he held several positions as a scout, position coach, assistant and head coach between the Kansas City Chiefs, Tampa Bay Buccaneers and New York Jets. He made the playoffs four times as an NFL head coach.

“Passion for my faith, my family and my occupation as a football coach are the things that have driven me back to the grass. I stand ready for the challenge…to elevate Sun Devil Football. I am very excited and humbled to be the Arizona State head football coach,” said Edwards in a statement.

Additionally, the university and Anderson unveiled plans for restructured ASU football program. Edwards will supervise its new leadership model, which is similar to an NFL approach with a general manager structure.

The ASU football program has sports and administrative divisions that operate as distinct but collective units. Both divisions are focused on improving all aspects of Sun Devil Football.

In a statement, Anderson said their goal is to “reach unprecedented heights” for ASU football program. Therefore, it needs a “head coach who serves as a CEO, a central leader with a collaborative staff around him.” He added, “Equally important, the head coach will be a dynamic and tireless recruiter.”