Home America Coronavirus is proving what we already know: People can work from home
SHARE 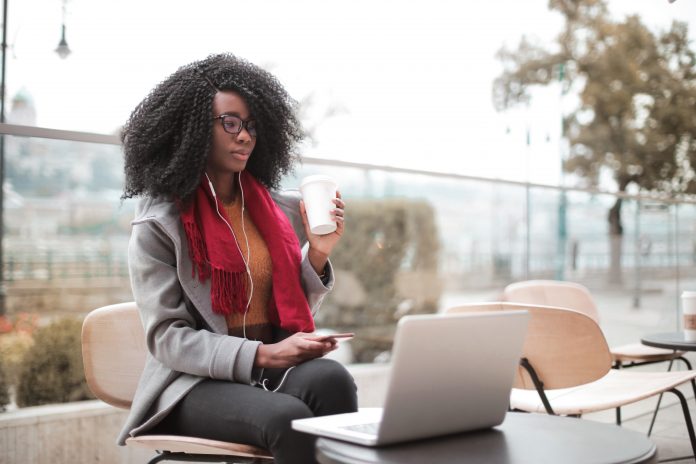 If you’ve been paying attention to the news in the past few weeks, you’ve likely seen the reports about companies turning to telecommuting wherever possible. Meaning that employees are working from home, rather than being physically present in the office. For many U.S. companies this is new — except that it isn’t. The Harvard review reported in 2019 that alternative working arrangements — meaning working arrangements where employees were not necessarily in the office 100% of the time — were growing faster than traditional jobs.

The recent need for social distancing to halt the spread of the COVID-19 virus is highlighting this employment trend like never before. Companies in the hardest hit areas in the U.S. have been announcing plans for telecommuting over the past few months. Amazon, which has a large presence in the Seattle area, has been encouraging its employees to work from home where possible.

Other companies have followed suit. Boeing, which recently suspended operations at one of its Puget Sound facilities, was also encouraging all employees whose jobs allowed for telecommuting to work from home. But it’s not just large corporations jumping on the remote work bandwagon.

Twitter is filled with posts from users who are adjusting to their new home offices. Users posting under the hashtags #WorkFromHome and #WorkFromHomeFails are sharing cute photos of their kids and pets “helping” them with their work. Others are sharing comics that cover work-from-home topics — for example, satirical commentary on the reality that many in-person meetings could, in fact, have been emails. I’m sure we’ve all seen that one (and giggled/groaned).

But like I said, telecommuting isn’t new. It’s something gig workers have been doing for years now. Freelancers, independent contractors, consultants and other nontraditional players who make up the gig economy have been working from home, or the coffee shop, or the beach, for years. And we make up 20% to 30% of the U.S. workforce, according to the McKinsey Global Institute. And that figure is from 2016. Remember that this part of the workforce is growing.

I’m also a freelancer. And I’ve been doing this for a couple of years now. Other freelancers I know of have been doing this for a decade or longer. This isn’t new. We use platforms like UpWork, fiverr, and freelancer.com to connect with companies in search of freelance work. We also build a client base the old-fashioned way — we cultivate networks and follow leads. But the point is, businesses have been using freelancers who work from home for some time now. Otherwise, platforms that connect businesses with freelancers wouldn’t exist.

UpWork, one of the largest freelancing platforms, began over a decade ago, according to their About Us page, when one of their founders hired a friend for remote work on a web project. It was so successful, they decided that being able to pull from a larger pool of talent was something other companies could benefit from. So they built a business around allowing other companies to do just that using their secure platform.

And because I already work from home, when the spread of COVID-19 began to pick up my area —I live in the Seattle area — I wasn’t all that concerned for myself. The only changes I made to my life, were to be more careful about visiting with friends and family to prevent spread to more vulnerable members. I also don’t have to worry about taking sick leave. My computer can’t catch a cold from me if I get sick — and neither can my clients. My downtime is also significantly reduced since I can still go to work with mild symptoms.

Which brings up a question: If we’ve had the ability to work remotely for a decade now and the benefits are so great, why has corporate America been so slow to come around to this? If not for the majority of workers, then for those workers who require accommodation, like disabled workers, remote work makes sense. Doesn’t it?

Another topic trending on social media revolves around remote work accommodations for disabled workers. And it’s scathing. Many people in disabled communities are pointing out how quickly businesses were willing to send abled workers home with remote work but have been refusing disabled workers this same accommodation for years. Take a minute and comb through the hashtag #DisabledAndSaltyAF today if you haven’t already. And check out this selection from just one thread. 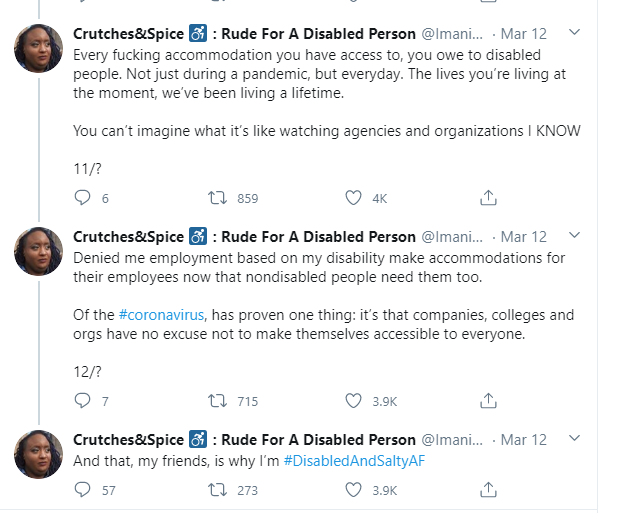 “[If] the #coronavirus has proven one thing: it’s that companies, colleges and orgs have no excuse not to make themselves accessible to everyone.”

The beginning of that thread details the user’s difficulties finding employment that would accommodate their needs, despite being able and willing to relocate internationally. At one point, they quit volunteering information about their disability just to get interviews.

Other users echo statements made in this thread. One user commented that they were denied remote accommodations when they became chronically ill, despite having coworkers who already worked from home.

Reading the experiences of these people, it’s difficult to justify the reluctance of American businesses to support remote work for workers who need it. I can only speculate that businesses are reluctant to hire workers whom they perceive to be more likely to use benefits, like paid sick leave, than their abled counterparts.

It should be noted that both Amazon and Boeing are offering paid sick leave to employees affected by the COVID-19 virus. However, plans for remote work and closures of facilities followed reports of confirmed cases among employees. Amazon employees accused the company of not doing enough to protect them from the virus and started a petition urging further steps. Boeing has closed their Puget sound facility following the death of an affected employee.

Which brings us back to the realities COVID-19 is forcing America to face. Many jobs can be performed from home. A third of the global workforce already engages in remote work. American businesses have failed our more vulnerable communities by denying accommodations we willingly offer abled members.

We will make it through this current pandemic. Though we’re late to act, many states at the center of the epidemic are taking action to halt the spread of the virus. As of today, 17 U.S. states have issued some form of Stay at Home order, which also halts the operation nonessential businesses. The ability to work remotely may well be the thing that keeps businesses operating and our economy moving.