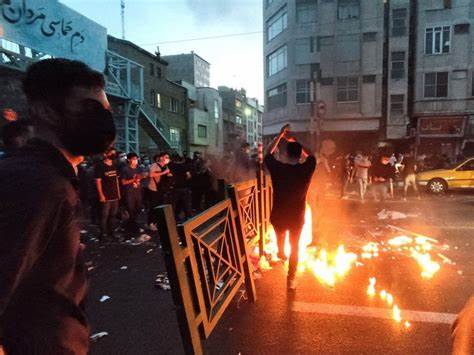 The uprising in Iran was ignited by the death of a woman killed in Basij police custody in the city of Tehran. And protests have spread to 50 Iranian cities.

Unrest has been reported in areas including the capital Tehran, as well as, Esfahan, Karaj, Shiraz, Tabriz, Neyshapur, Kerman, Kish Island, Yazd, and Mashhad.

According to state TV, there have been at least 41 killed, including demonstrators and police. But the numbers are likely much higher than what the state reports.

The death of Mahsa Amini

The murder of 22-year-old Mahsa Amini, a Kurdish-Iranian woman sent crowds to the street. Amini was arrested for breaking Islam’s strict rules on wearing a hijab women’s head covering.

She was arrested by Tehran’s so-called “morality police” or the Basij militia which is a branch of the Islamic Revolutionary Guard Corps.

It is alleged that she was badly beaten. And fell into a coma before she died.

Amini had reportedly suffered multiple blows to the head.

The mass protests began 10 days ago, soon after news of her death spread on social media.

Videos and images showing women burning their hijabs and cars set on fire in the background appeared online.  And huge crowds chanting “death to the dictator” were posted despite the government’s intermittent shutdown of the country’s internet.