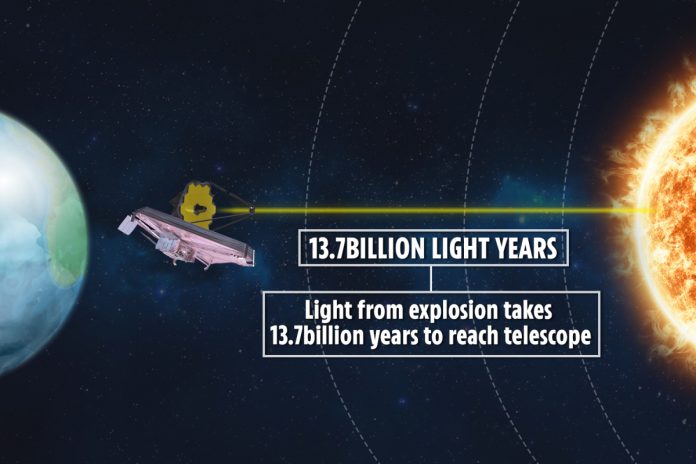 On Saturday the sun shield on the James Webb space telescope was fully deployed. The last mirrored wing of the giant telescope unfolded in space. Two weeks after its Christmas Day launch, and 30 years after development began NASA reached the “end of deployment.”

The James Webb aka the “Golden Surfer” is the most powerful telescope to ever reach space. And it was launched out of Maryland-based NASA Goddard Space Flight Center.

The James Webb launched on an Ariane 5 rocket from the Guiana Space Center in South America.  NASA provided a virtual simulation Livestream of the entire process from launch to deployment.

Bill Ochs, the Nasa Webb project manager commented that “Thousands of people have worked on JWST to get us to this point. I will tell you every single day that I am honored and humbled to be associated with this team.”

“The events of the last two weeks have truly been amazing,” Ochs said Saturday afternoon. “Today represents the beginning of a journey for this incredible machine, to its discoveries that we’ll be making in the future.”

After 30 years in operation, the Hubble Telescope began to shut down in June. And NASA’s efforts to restart it failed.

The James Webb space telescope is a joint project of the American, European and Canadian space agencies. It cost over 10 billion dollars during over 20 years of development and construction.

Telemetry beamed down from the Webb confirmed that the mirrored side panels had been latched and locked in place.

It will be this summer before the observatory captures and sends the first images back to Earth.

The James Webb space telescope is a joint project of the American, European and Canadian space agencies. It cost over 10 billion dollars during over 20 years of development and construction.

The space agency has high expectations that the amazing mirrors will capture events and images that occurred a hundred million years after the Big Bang.

Scientists are hoping that people on Earth will be able to view the first stars that lit up the Universe. Another part of the agenda is to train the telescope’s big “eye” on distant planets’ atmospheres to find out if humans could live there.

“Webb has the potential to blow people away, even people who are used to the pictures from the Hubble Space Telescope – and I know that’s hard to imagine,” said Lee Feinberg, whose team was responsible for the Webb mirror at NASA.

“Webb is so powerful, almost anywhere we look we’re going to be breaking new ground in a huge way,” Feinberg added.

Thomas Zurbuchen, Director of Science at Nasa, said: “We have a deployed telescope on orbit, a magnificent telescope the likes of which the world has never seen. So, how does it feel to make history, everybody?”

The Hubble Telescope’s images transformed our view of the cosmos. WAnd Webb’s should be even more enlightening and impressive.