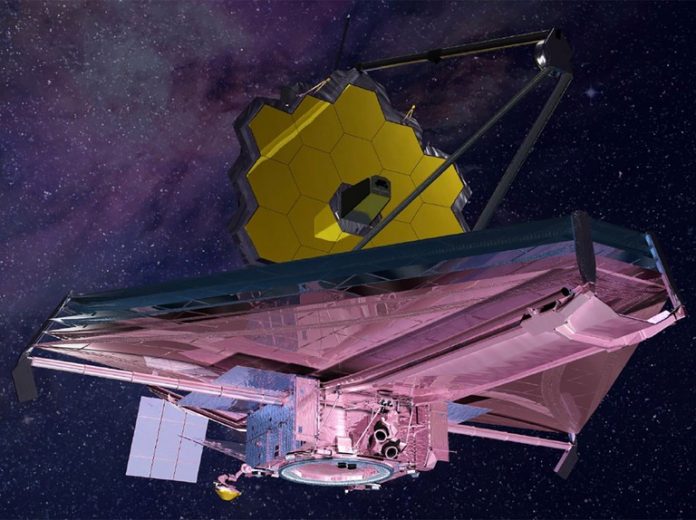 In December, the huge James Webb Space Telescope is scheduled to launch. It is all set to replace the glitching Hubble Space Telescope. NASA plans on sending out the biggest, most powerful telescope in existence. And it will take over the job of photographing the universe.

For 30 years the Hubble was sending a steady stream of views from space before it began to have serious technical problems. And for at least 20 years astronomers, scientists and engineers have been working on the James Webb Space Telescope. Named after a former NASA administrator the cutting edge scope will cost over 10 billion dollars. Its development has taken years longer and cost much more than ever anticipated.

The telescope’s main mirror is 21 feet across and covered in gold. It is much bigger than Hubble’s mirror. This enhancement should let the  Webb Scope collect more light for better contrast and distance viewing.

The telescope is supposed to help our search for life on other planets. It will allow scientists to analyze the starlight that filters through the atmosphere of other planets.

NASA’s website explains that “The longer wavelengths enable Webb to look much closer to the beginning of time and to hunt for the unobserved formation of the first galaxies, as well as to look inside dust clouds where stars and planetary systems are forming today.”

For over 30 years the now-aging Hubble has given us a window into space.

Jane Rigby, a NASA astrophysicist on the James Webb team discussed the importance of the iconic Hubble Space Telescope.

“I think Hubble certainly is the first telescope where the images appeared everywhere,” she said. “I have socks with Hubble pictures on them. I’ve seen them on the sides of a U-Haul going down the highway.”

The Hubble images, she says, impact us “in this kind of awe-inspiring, connected to everything, maybe spiritual way.”

Big telescopes on the ground always had to look up through the Earth’s atmosphere. And the distorting effect on the light does not always accurately capture space objects.

By sending the Hubble into orbit it gave more detailed 360-degree views than ever before. Planets, stars, and clouds of gas that were visible from Earth were suddenly transformed into stunning shimmering visions. And scientists named these heavenly bodies names like the “Pillars of Creation.”

The Spitzer Space Telescope was one of the first infrared space telescopes. It operated for about 17 years before shutting down in 2020. It is smaller and less powerful than the James Webb. The technology reveals never-before-seen images in the center of the Milky Way.

Infrared tech can see older, colder objects, and can give views, through space dust, that are not visible in Hubble images.

This telescope’s massive mirror is divided. It has a 5-layer sun shield the size of a tennis court. The device folds up into a rocket and can open when needed.

The technology needs to operate seamlessly without any issues. Once it’s launched there will be no way to send up repair crews. Unlike the Hubble, the James Webb will be stationed one million miles from the Earth.

It takes time for light to travel through space. And the James Webb Space Telescope will be able to trace that journey.  It will be able to view light that’s been traveling for thousands of years. The telescope is optimized to see near-and mid-infrared light that is not visible to people.

“Webb will be able to see galaxies as they looked a couple hundred million years after the Big Bang,” Rigby explains.

The images that the James Webb telescope will send to the Earth will be the most amazing merger of art and science.