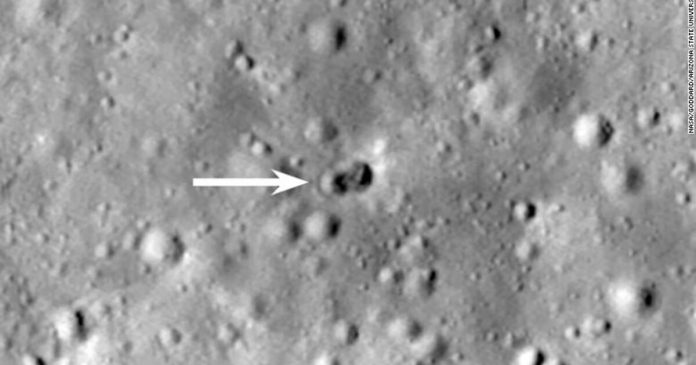 So far, no one on Earth has claimed responsibility for the mystery rocket that crashed on the moon. The NASA Lunar Reconnaissance Orbiter (LRO) shared the first images of the crash site on June 24th. And the photos reveal a double-crater mystery that can’t be explained by current Earth science.

NASA scientists had been tracking the unidentified spacecraft since January when they noticed it was on a collision course with the Moon. It finally hit on March 4. And crashed near the Hertzsprung crater on the far side of the Moon.

According to 2016 Arizona State University astronomy data, the mystery rocket joins at least 47 NASA rocket bodies that left “spacecraft impacts” on the moon.

The much-studied and photographed images are different from those released on June 24th.

Four large moon craters attributed to The Apollo 13, 14, 15, and 17 missions left 4 large moon craters. According to NASA, they are all much larger than each of the craters shown in the latest images.  And the double-crater width combined is about the size of one Apollo crater.

According to a NASA statement. “No other rocket body impacts on the Moon created double craters.”

NASA explained that this was no ordinary rocket. And the scientists can only speculate two heavy masses on each end of the rocket may have caused the craters.

“Typically, a spent rocket has mass concentrated at the motor end; the rest of the rocket stage mainly consists of an empty fuel tank,” according to the statement.

“Since the origin of the rocket body remains uncertain, the double nature of the crater may indicate its identity,” NASA said in a news release.

The photos show that the crash debris created a double crater mystery. It is estimated that the rocket crashed at an estimated 5,770 mph (9,290 km/h) and the object was about 3 tons.

The mystery rocket has confused space watchers who have been tracking it since January.

Gray was the first to notice that the object wasn’t an asteroid since it wasn’t orbiting the sun. It was orbiting the earth. And it was assigned the tracking name “WE0913A.”

He initially claimed it was one of Elon Musk’s SpaceX rockets. Gray suggested it was a Falcon X stage two rocket launched in 2015. And voiced his suspicions it was constructed by humans.

SpaceX proved to NASA and Gray that it wasn’t their rocket.

Gray soon said that it must be the upper stage of a T1 rocket, which the Chinese launched in 2014. The Chinese denied it was theirs. And said that the 2014 rocket completely burned up in Earth’s atmosphere.

Gray blogged after the images were released that the unidentified rocket is “quite conclusively identified as the Chang’e 5-T1 booster.”

“I’m fairly convinced that there’s no way it can be anything else,” Gray said. “At this point, we rarely get anything quite this certain.”

But NASA hasn’t agreed with Gray, so far. Because no one has been able to explain the double-crater mystery at the crash-site.