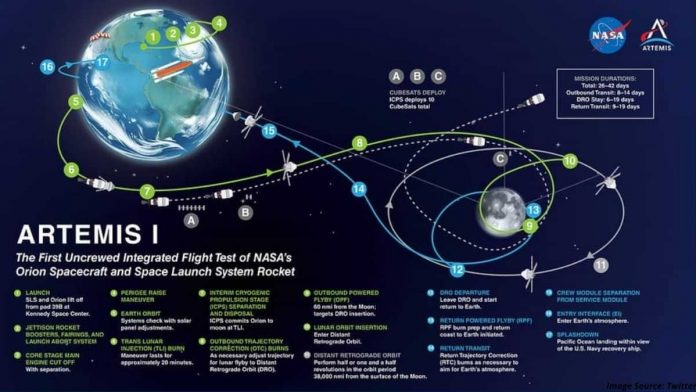 NASA is hoping to resume the Artemis I mission on Saturday, September 3rd. The space agency has identified a two-hour launch window beginning at 2:17 p.m. ET. And until then, the mega moon rocket will remain upright on its pad at the Kennedy Space Center in Florida.

In Greek mythology, Artemis was Apollo’s twin sister. Between 1969 and 1972 NASA sent 6 manned missions to the moon in their Apollo missions. And we haven’t been back. The Artemis missions are designed to be a return to the moon.

This is an uncrewed mission.  Artemis II with a diverse crew is slated for 2024.

Mission managers announced on Tuesday afternoon that they would be attempting the launch this weekend. NASA has until September 5 to get the moon rocket up before it is required to be taken off the pad for refurbishment.

On Monday NASA officials had to scrub the Artemis I mission just before take-off. The countdown clock was stopped at 40 minutes until liftoff.

The Space Launch System mega moon rocket had some engineering problems, engine temperature, and a leak, that shut down the launch.

The ground crew noticed that all four core stage engines weren’t chilling to -420 degrees Fahrenheit. Engine No.3 was 30 to 40 degrees warmer than the other engines.

John Honeycutt, manager of the Space Launch System rocket said that the engineers were afraid if any engine didn’t reach the optimal cold temperature, it could break due to the sudden stress of super-cold fuel.

NASA is hard at work on 2nd try

On the second launch, the fueling process is set to start earlier. Then the mission controllers will have more time for the engines to cool to the right temperature before ignition.

Honeycutt says that he is confident a sensor is a problem in Engine No. 3. And that liquid hydrogen was flowing into all the engines during the halted countdown on Monday.

The sensors that are working right indicate that the engine would have properly cooled down. And his team is working on a “flight rationale” plan to allow the rocket to launch without changing out the temperature sensor on the engine.

The flight technicians will also try to stop a leak in a liquid hydrogen line. These types of leaks are nothing new at NASA.

The Artemis I and all NASA’s rockets depend on liquid hydrogen for fuel. It is good for keeping the tanks light making flight easier. It also burns at scorchingly high temperatures.

If the mission gets postponed again the next “go date” could be Monday, Sept. 5, according to launch director Charlie Blackwell-Thompson.

She says that more complications could require the massive moon rocket to be returned to the Vehicle Assembly Building. This is a four-mile trek from the pad to the VAB. And if that happens, we could see weeks of mission delays.