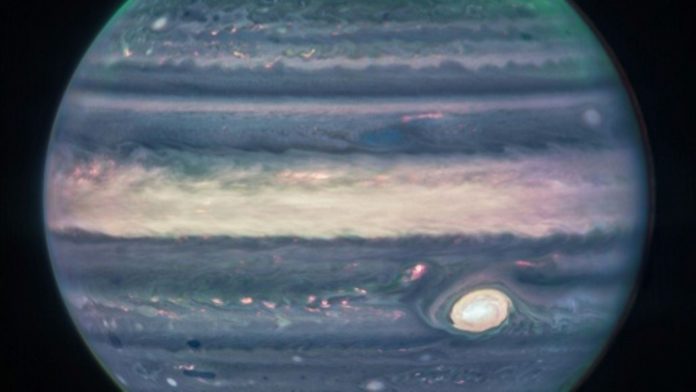 On Monday NASA released new images of Jupiter taken by the James Webb Space Telescope (JWST).  NASA claims that the new and improved JWST is “the world’s largest and most powerful space telescope” ever sent into space.

Astronomers are awed by the second release of “remarkable” detailed images taken last month of our Solar System’s largest planet.

The “wide-field” images show that Jupiter has faint rings similar to Saturn. And “fuzzy spots” that appear in the lower background are actually other galaxies.

The images depict auroras, giant space storms, Jupiter’s moons, and the rings surrounding the planet. The spacecraft/telescope is outfitted with a Near-Infrared Camera, or NIR Cam, which uses pin-pointing infrared filters to show never before seen details.

NASA, is working in a joint venture with the Canadian Space Agency and the European Space Agency under the “Artemis Accords.” They expect the JWST will be the dominant force for space exploration and discovery in the coming decades.

Imke de Pater, one of the observation leads said, “We hadn’t really expected it to be this good, to be honest.”

“It’s really remarkable that we can see details on Jupiter together with its rings, tiny satellites and even galaxies in one image,” said de Pater who works as a planetary astronomer and professor emerita of the University of California, Berkeley.

The first image is a standalone view of Jupiter. It is a composite of several images captured by Webb. It showcases auroras extending to high altitudes above both the North and South poles of the planet. And was created by using filters that map to redder colors.

An additional filter, maps to blues. And gives greater definition to light reflected from a deeper cloud. The strategic filtering process reveals the Great Red Spot. It is a powerful storm on the planet’s surface. And appears white in the image.

“This one image sums up the science of our Jupiter system program, which studies the dynamics and chemistry of Jupiter itself, its rings and its satellite system,” said Thierry Fouchet, another observation lead and professor at the Paris Observatory.

Last month, NASA released the first images taken by the James Webb Space Telescope. The spacecraft/telescope is the $10 billion replacement to the Hubble Space Telescope. It took decades to develop. And months to launch and complete alignment and testing of the massive magnifying mirror system.

“You’re seeing just a small, little portion of the universe,” he added.