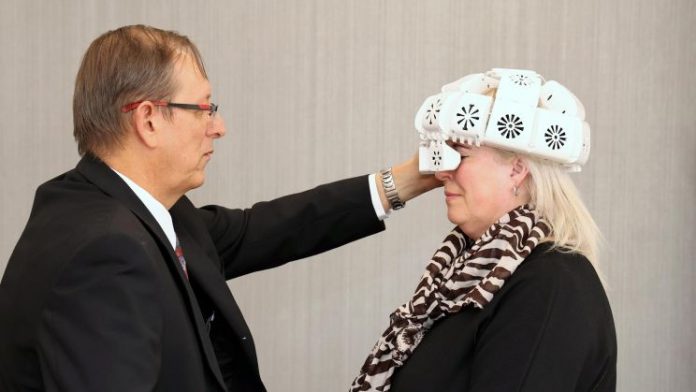 A light-beaming helmet using infrared light could boost dementia patients’ memory and muscle control.  Dr. Paul Chazot, in the Department of Biosciences, Durham University, in the UK led the study. And his research was published in the journal Photobiomodulation, Photomedicine And Laser Surgery on Monday.

In the last two decades, a large body of scientific research has been done on the beneficial effects of infrared light in the range of 600 to 1000 nm. It has been reported that infrared laser treatment may be an effective treatment of  TBI, PTSD, and depression.

Animal studies have shown that infrared photobiomodulation or PBM may reduce the size and severity of brain injury and stroke. According to Michael Hamblin, Ph.D., from the Wellman Center for Photomedicine at Massachusetts General Hospital in Boston studies have shown infrared light can diminish damage and physiological symptoms in depression, posttraumatic stress disorder (PTSD), Parkinson’s, and Alzheimer disease.

Hamblin describes “the use of red or near-infrared light to stimulate, heal, regenerate, and protect tissue that has either been injured, is degenerating, or else is at risk of dying.”

The Durham University study shows that infrared light is self-delivered to the brain using the helmet. The helmet works by increasing blood flow so the brain gets more oxygen.

Durham University created a specially equipped light-beaming helmet for the research project. For the study, beams of invisible waves of light were focused on healthy brains. And the result is improved memories and thought processing functions.

The helmet costs $10,000 to develop. It works by forcing brain cells to boost their energy levels. People with dementia usually suffer from low neurological energy levels. And this encourages blood flow to the brain and enhances oxygen. 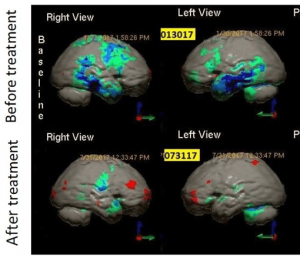 The research project included 14 healthy people, aged 45 and over, from the UK. They had treatment over a four-week period. A control group of 13 people was using a dummy light-beaming helmet.

The scientists measured the memory, verbal, and motor skills of the participants in both groups before and after the treatment period. And they saw significant improvements in motor function (finger tapping), memory performance, delayed memory, and brain processing speed, in healthy people who had received the infrared light.

There were no reported adverse effects.

Dr. Paul Chazot said: “We’ve shown what appears to be real improvements in memory and other neurological processes for healthy people when their brains are exposed to a specific wavelength of infrared light for consistent, short periods of time.

“While this is a pilot study and more research is needed, there are promising indications that therapy involving infrared light might also be beneficial for people living with dementia and this is worth exploring. Indeed, we and our US research collaborators recently also published a new independent clinical study which provides the first evidence for profound and rapid improvement in memory performance in dementia,” he added.