This is the second time in three days the President slammed the e-commerce giant on Twitter.

In his latest tweet, Trump claimed that USPS will lose an average of $1.50 per package it delivers for Amazon. He believed that the post office is losing billions of dollars.

In addition, the President estimated that Amazon’s shipping cost will increase by $2.6 billion if USPS will raise its parcel rates. He said the “scam must stop” and the e-commerce giant “must pay real costs (and taxes) now!”

While we are on the subject, it is reported that the U.S. Post Office will lose $1.50 on average for each package it delivers for Amazon. That amounts to Billions of Dollars. The Failing N.Y. Times reports that “the size of the company’s lobbying staff has ballooned,” and that…

…does not include the Fake Washington Post, which is used as a “lobbyist” and should so REGISTER. If the P.O. “increased its parcel rates, Amazon’s shipping costs would rise by $2.6 Billion.” This Post Office scam must stop. Amazon must pay real costs (and taxes) now!

Last year, a Citigroup analysis indicated that Amazon is receiving a subsidy of $1.46 per package from USPS. However, the company argued that Postal Regulatory Commission consistently found that its contracts profitable for the post office.

Additionally, Amazon pointed out that it “invested hundreds of millions of dollars…directly into the USPS last mile network. This investment resulted in more efficient processes as well as thousands of jobs and related economic benefits in local communities.”

Trump wants to go after Amazon over taxes

On Wednesday, Axios reported that Trump is obsessed with Amazon and he wants to go after it due to its tax treatment. He also believed that the e-commerce giant is hurting brick-and-mortar retailers and shopping malls. He is wondering if the government could the use the antitrust or competition law against the company.

Amazon’s stock price declined more than 4% on Wednesday. The e-commerce giant lost more than $30 billion in stock value that day.

On Thursday, Trump confirmed the media outlet’s report. In a tweet, he emphasized that he had concerns with Amazon long before the election. He noted that the e-commerce giant is paying “little or no taxes to state and local governments.” He also claimed that it is “putting many thousands of retailers out of business.”

I have stated my concerns with Amazon long before the Election. Unlike others, they pay little or no taxes to state & local governments, use our Postal System as their Delivery Boy (causing tremendous loss to the U.S.), and are putting many thousands of retailers out of business! 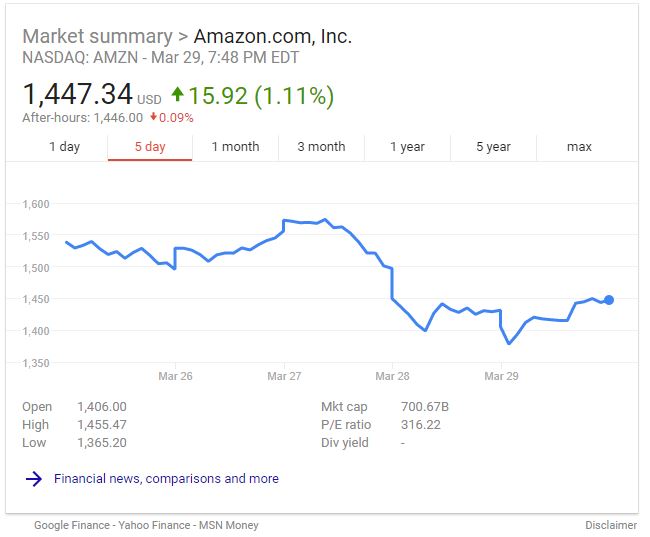 The U.S. stock markets are closed on Friday to observe Good Friday, a Christian holiday commemorating the crucifixion and death of Jesus Christ.