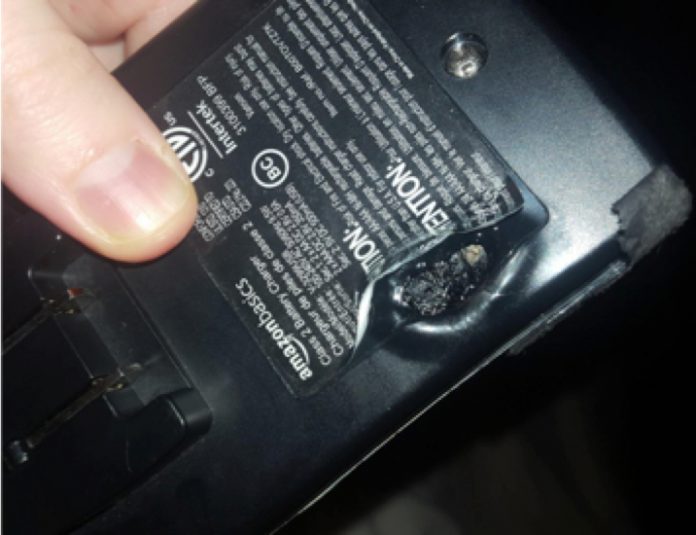 In a letter to Bezos,  U.S. Senators Richard Blumenthal of Connecticut, Robert Menendez of New Jersey, and Edward Markey of Massachusetts told Bezos that Amazon “ignored consumer safety complaints” by continuing to sell AmazonBasics electronics “linked to fires,  explosions, smoking, melting, and physical harm to consumers and their property.”

The media outlet documented the e-commerce giant’s “failure to take action” on these very serious consumer complaints. For example, a consumer from Connecticut named Austin Parra suffered second-degree burns and throat injuries from breathing in smoke after his chair caught on fire from a defective AmazonBasics USB cord. Parra was sleeping when the incident happened in 2017.

“Amazon must immediately stop selling [any] AmazonBasics products
that is defective” and “notify consumers that are in possession of these products,” the Senators wrote to Bezos.

They also demanded Bezos that Amazon must “work with the
U.S. Consumer Product Safety Commission (CPSC) to conduct swift and thorough recalls to remove these dangerous products from homes.”

Every business is legally required to immediately report any “potentially hazardous” items to the CPSC. The Commission then determines if an official recall is warranted. A company can initiate a voluntary recall, as well. And this is done with CPSC cooperation.

In the U.S., Amazon has publicly recalled only two AmazonBasics items. In 2018 the company received 53 reports of power banks overheating and there were 25 reports of a space heater that was overheating, sparking, or burning. In both cases, Amazon notified the CPSC and recalled the two items voluntarily. In 2019,  Parra filed a lawsuit, which was settled by Amazon.

The Senators noted that Amazon removed some of its hazardous products from its online marketplace. However, its “response to personal harm and property damage has far too often been inaction and silence.”

They urged Bezos that “Amazon must prioritize consumer safety over sales”  since people are shopping more online during the COVID-19 pandemic.

Furthermore, the Senators wrote, “Given the significant risk to consumers, we request information on what steps Amazon is taking” to make the situation better.  They asked a litany of questions and requested a response from Amazon within 30 days.

In August 2019, Sen. Blumenthal and Menendez wrote a letter encouraging Amazon to strengthen its efforts to protect consumers from defective products that remain for sale on its platform. Their letter was prompted by a BuzzFeed article highly critical of the  “Amazon’s Choice” labeling of products.