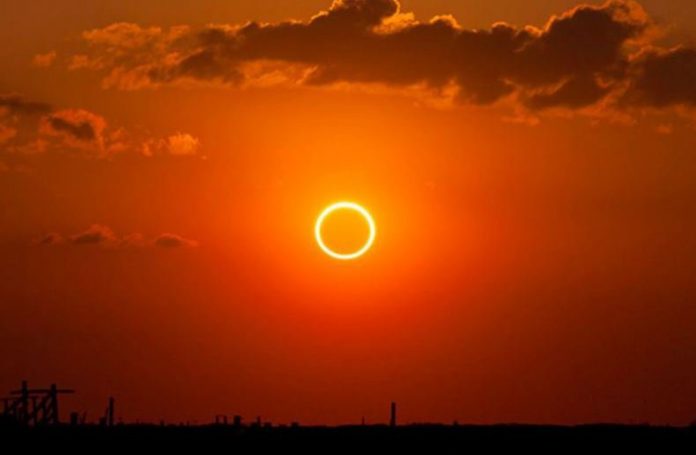 On June 10th an unusual partial eclipse of the Sun will be visible for some parts of the U.S. and Canada at sunrise. This will show up as a glowing Ring of Fire.  The annular eclipse will only be visible from a fraction of a second to about 12 minutes. In 2020, the solar eclipse lasted just under a minute and a half.

If you happen to be on the centerline of the polar region, the eclipse will last almost 4 minutes.

Skywatchers can see the phenomenon South and West of a line running from Edmonton and Alberta, Canada to Des Moines, Iowa, south through Savannah, Georgia. But since the eclipse ends before sunrise, most of the southern and western United States will miss this solar light show.

Early on the morning of June 10, an unusual solar event will be appearing to people living around the Great Lakes region, east across New York state, New England, and a large portion of southeast Canada. 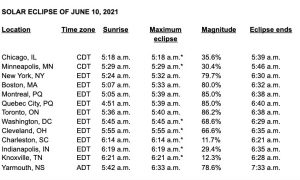 Actually, Canadians will get some of the best views of the Ring of Fire Eclipse. And due to the COVID-19 pandemic travel restrictions, Americans can’t cross the border between the U.S. and Canada to observe the eclipse.

Four-fifths or more of the sun’s diameter will be darkened by the moon’s shadow as the sun ascends. Areas north of the line may only see a small shadow on the lower half of the rising sun. The farther north and east you go, the bigger the shadow appears.

If you are in the viewing areas and you have clear skies look to the east-northeast, to see the rising sun appear crescent-shaped, or even surrounded by a ring of fire.

Thousands of years ago, early civilizations were terrified by the bizarre appearance of the sun in a partial eclipse. Some were concerned that something was wrong with their “life-giver,” the sun. Or they may have even feared that they are under attack.

Today’s astronomers and skywatchers know what causes an eclipse. It’s easier to enjoy the spectacle when you understand that it’s the shadow of the moon making the sun dark. And a partial solar eclipse is not dangerous to humans.

The time when the moon appears to move on or off the sun is called the first and last contact.

For hundreds of years, explorers attempted to navigate by the sun and the stars. After months in the wild, a chronometer wasn’t always trusted to synch up with Greenwich time. By observing the eclipse of Aug. 5, 1766, navigator Capt. James Cook was able to determine the longitude of an island off the coast of Newfoundland. Cook’s calculation differs from modern readings by only 22 arc seconds.

The ring of fire will be shining with only one-tenth of normal sunlight. The illumination will be more shadowy than dark. And during the brief eclipse, a clear sky should turn deep blue. And the surrounding landscape may be silvery hue.

Remember if you want a direct view of the sun use tinted lenses. Good luck! Enjoy the sunrise and the ring of fire.