Home America SOURCES: China is covering up the rapid rise of Coronavirus
SHARE 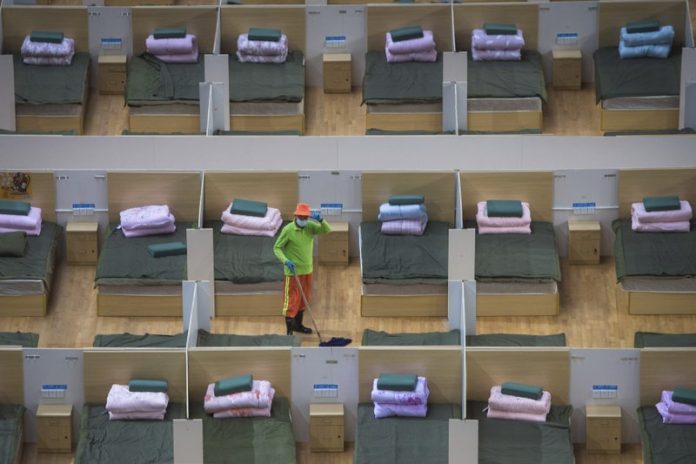 According to sources, China is covering up the rapid spread of the Coronavirus.

The number of new cases of the coronavirus reportedly dropped in China dropped for a second straight day, health officials said Wednesday.   Was this a possible glimmer of hope amid the outbreak that has infected over 45,000 people worldwide and killed more than 1,100, or is it damage control by the Chinese government?

Dr. Mike Ryan, the head of emergencies for the World Health Organization, said it is “way too early to try to predict the beginning of the end” of the crisis in China. But he said: “The stabilization in cases in the last number of days is very reassuring and it is to a great extent the result of the huge public health operation in China.”

Nevertheless, China has locked down an unprecedented 60 million people in an effort to curb the spread of the virus, which has hit hardest in the city of Wuhan and surrounding Hubei province.

The country’s National Health Commission said 2,015 new cases were counted on Tuesday, the second straight daily decline and down from nearly 3,900 a week ago. Commission spokesman Mi Feng said the situation is still grim but “we have seen some positive changes.”

WHO director-general Tedros Adhanom Ghebreyesus said in Geneva that the numbers “must be interpreted with extreme caution,” adding: “This outbreak could still go in any direction.” At the same time, he noted that the number of other countries reporting cases — about two dozen — has not changed since Feb. 4.

All but one of the deaths recorded so far have been in China, as have more than 99% of all reported infections in the world.

“In principle at the moment, there’s no evidence out there that this virus is out there causing efficient community transmission in other countries,” Ryan said. “We have a window of opportunity to shut this virus down.”

At the end of a two-day meeting aimed at speeding the development of new tests, drugs and vaccines for the new virus, WHO said scientists had agreed upon a set of global research priorities but warned it could still take considerable time before any licensed products might be available.

Chinese President Xi Jinping promised tax cuts and other aid to industry as the ruling Communist Party tries to limit the mounting damage to the economy.

The country is struggling to restart its economy after the annual Lunar New Year holiday was extended to try to keep people home and contain the virus. Traffic remained light in Beijing, and many people were still working at home.

Companies are facing increasing losses because of the closing of factories, offices, shops and other businesses in the most sweeping anti-disease measures ever imposed.

A large cluster of cases in Tianjin, a port city southeast of Beijing, has been traced to a department store, Chinese state media said. One-third of Tianjin’s 104 confirmed cases are in Baodi district, where the store is situated, the Xinhua News Agency reported.

A salesperson in the store’s home appliance section was the first diagnosed on Jan. 31, Xinhua said, and a series of cases followed. None of those infected had visited Wuhan recently, and with the exception of one married couple, they worked in different sections of the store and did not know one another.

Meanwhile, organizers of the world’s biggest mobile technology fair — the annual Mobile World Congress show, set for Feb. 24-27 in Barcelona, Spain — canceled the event because of worries about the viral outbreak.

The decision came after dozens of tech companies and wireless carriers dropped out, including Nokia, Vodafone, Ericsson, Nokia, Sony, Amazon, Intel and LG. The extravaganza had been expected to draw more than 100,000 visitors from about 200 countries, including 5,000 to 6,000 from China.

Elsewhere around the world, DBS bank in Singapore cleared its office, telling 300 employees to work from home after it learned that an employee had been infected. The city-state has 50 confirmed cases. And a Formula One race in Shanghai in April was added to the list of canceled events.

A citizen journalist reporting on the epidemic in Wuhan has disappeared, activists said, becoming the second to vanish in recent days amid tightening controls on information in China.

Fang had posted videos of Wuhan’s overcrowded hospitals, including bodies in a van waiting to be taken to a crematorium. The last video he posted was of a piece of paper reading, “All citizens resist, hand power back to the people.”

Another citizen journalist, Chen Qiushi, vanished on Friday. Non-sanctioned reporting on the outbreak by actitivists is challenging the Communist Party’s tightly policed monopoly on information on an unprecedented scale.

Passengers aboard a cruise ship that has been barred from docking by four governments may finally set foot on land again.

Holland America Line said the MS Westerdam will arrive Thursday morning in Sihanoukville, Cambodia. The ship has been turned away by the Philippines, Taiwan, Japan and Thailand, though its operator said no cases of the disease have been confirmed among the more than 2,200 passengers and crew.

And in Japan, 39 new cases were confirmed on a cruise ship quarantined at Yokohama, bringing the total to 174 aboard the Diamond Princess.