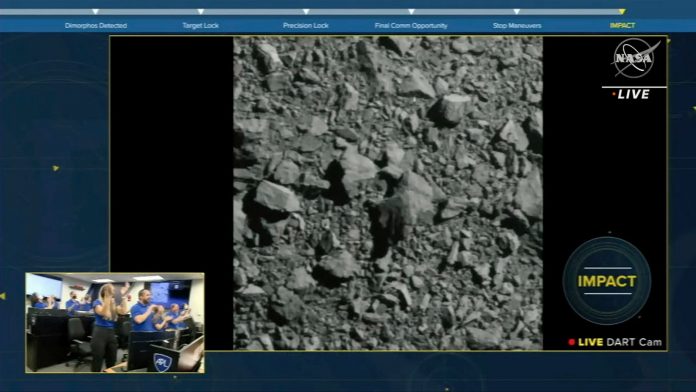 NASA crashed its Double Asteroid Redirection Test aka DART spacecraft into an asteroid 6.8 million miles from Earth.  And Monday’s test was by all accounts a success.

The mission was designed to test the possibility of deflecting dangerous asteroids that are set on a collision course toward Earth.

The DART probe traveled at a speed greater than 14,000 miles per hour to hit the target asteroid about 17 meters or 55 ft from its exact center.

There was a direct hit on the 525 ft diameter asteroid named Dimorphos. This was confirmed and documented through space-based observations.

Dimorphos orbits a larger asteroid named Didymos. It is approximately 2,650 feet wide. Didymous can be seen in many of the images on the left of the DART targeted asteroid.

There were more than two dozen powerful ground-based telescopes focusing on the DART collision. And space-based cameras also captured detailed views of the intentional crash and its aftermath.