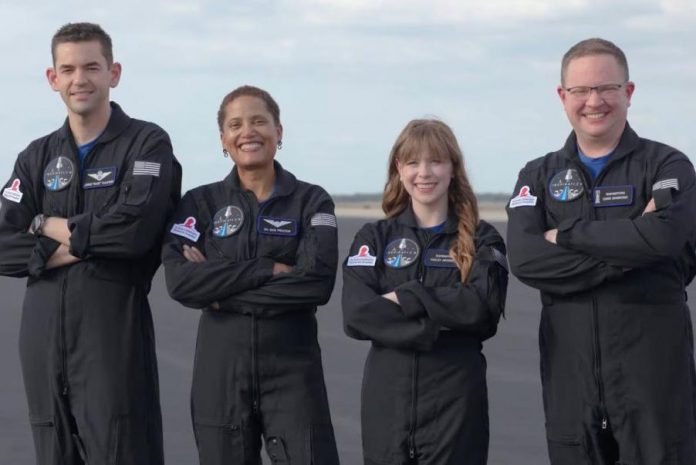 The SpaceX all-civilian crew of the Inspiration4 traveled to the Kennedy Space Center Complex last week. This is where the Falcon 9 will launch them into space aboard a Dragon spacecraft this September.

The crew is just beginning to prepare for their adventure in space. They began their training at Kennedy last week!

According to the mission website, the crew will “receive commercial astronaut training by SpaceX on the Falcon 9 launch vehicle and Dragon spacecraft, orbital mechanics, operating in microgravity, zero gravity, and other forms of stress testing.”

“They will go through emergency preparedness training, spacesuit and spacecraft ingress and egress exercises, as well as partial and full mission simulations,” according to SpaceX’s website.

The 4-person all-civilian crew will launch in September 2021. Each of the four crew members will represent Leadership, Hope, Generosity, and Prosperity.

Isaacman is the CEO and founder of Shift4 Payments, a Pennsylvania-based payment processor company.

Isaacman is sponsoring the mission. His payment for the ticket was a $100 million donation to St. Jude Children’s Research Hospital. Which he says “vastly exceeds the cost of the mission.”

“I truly want us to live in a world 50 or 100 years from now where people are jumping in their rockets, like the Jetsons and there are families bouncing around on the moon with their kid in a spacesuit,” Isaacman said in an interview with AP.

And he also purchased an ad that appeared in February’s Super Bowl which helped to fill the remaining seats on the mission.

We were aiming for badass with this video. https://t.co/DMuYLgmJmG

“We’re pushing boundaries in a number of areas,” Isaacman, told PEOPLE in an interview.

“We’re going farther than the space station as part of the mission, and we’re bringing along people like Hayley, who will have the first prosthesis in space.”

Hayley Arceneaux is a 29-year-old physician assistant at St. Jude Children’s Research Hospital in Memphis. She was the first Inspiration4 crew member chosen. On January 5th Isaacman asked her to serve the mission as a chief medical officer. And she represents Hope.

Arceneaux is a bone cancer survivor treated at St. Jude’s. At the age of 10, Arceneaux’s femur was partially removed and replaced with a rod. Her orthopedic surgeon assured her that, “There’s going to be no limits on you in space.”

The Louisiana native says she is thrilled to be representing what she believes will be a “sea change in space travel.”

“The one thing that I’m most excited about this mission is that I’m going up with a big rod in my leg,” she said in a PEOPLE interview. “I could have never been an astronaut until this mission because I would have had to have been physically perfect, and I don’t fit into that category. I love that this mission is changing that.”

“When I learned I was going to fill the Hope seat, I just felt like it was coming full circle because hope has been the word I’ve always held on to, ever since I was in treatment.”

She hopes to video call kids with cancer from space. “It is a responsibility, in every way, to represent hope. I want this mission to show kids going through cancer, for survivors, to dream big, and that the sky’s not even the limit.”

The centrifuge was an awesome way to kick off our training! https://t.co/bNte51nzzW

Christopher Sembroski and Dr. Sian Proctor won the once-in-a-lifetime opportunity to join the Inspiration4 mission. Anyone that made a donation to St Jude in February was entered into a lottery for a seat on the mission.

Chris Sembroski 41, a Lockheed Martin employee and Air Force veteran, will be acting as a mission specialist. Sembroski, the father of two children is based in Seattle He explains to  PEOPLE that he obtained his spot on the crew when a friend who won the sweepstakes was unable to go.

The data engineer is a “self-declared space nerd” that has always been in love with outer space since his childhood. He spent years stargazing from the roof of his high school. And was launching high-powered model rockets during his time in college.

Sembroski worked as a U.S. Space Camp counselor. While in college, he was involved with  ProSpace, a “grassroots lobbying effort that promoted legislation in Washington, D.C. to help open space travel and allow companies like SpaceX to exist,” explains a recent press release.

“For this crew to not be professional astronauts, to have us all be completely civilians, and to take this mission into space, it’s a huge symbol of opening up the space frontier to everyone and making that dream come true for so many more people,” he says. “It really makes it feel like it’s attainable.”

Isaacson says that Sembroski stands for the mission pillar of generosity.

Born in Guam, Dr. Sian Proctor, 51, who works for the Maricopa County Community College District (MCCCD) won a seat on the Inspiration4 mission. Besides being an educator, Dr. Proctor is a geoscientist, a trained pilot, and a well-known part of the space exploration community.

“This opportunity is proof that hard work and perseverance can pay off in unimaginable ways,” said Dr. Proctor. “I have always believed that I was preparing for something special, and that moment has arrived with Inspiration4.”

Dr. Sian Proctor is based in Tempe, Arizona, and works as the Open Educational Resource Coordinator for the MCCCD. Proctor was a finalist in the NASA astronaut selection process in 2009, and who also has her pilot license and a SCUBA certification — says she’s most looking forward to seeing earth from space.

Her father worked at the NASA tracking station for the Apollo Program (1963-1972). She says going to space has been the dream of her life.

“Hard work and perseverance can lead to these impossible dreams possible,” she tells PEOPLE in an interview. “This is an experience that I’ve dreamt about and now I’m actually getting to experience it.”

“That is absolutely the golden ticket moment,” Proctor says. “But I’m also thinking about being a teacher in space, and how I can share that message, and as an artist — to be able to draw and paint and write poetry and share the experience in that realm, too.”