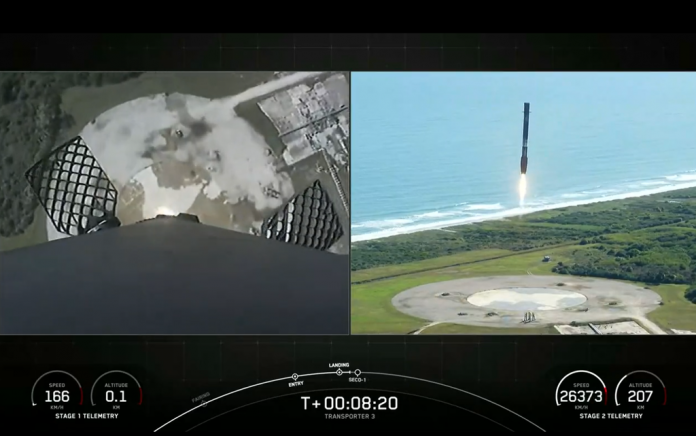 The Transporter-3 mission was launched by SpaceX on Thursday. A Falcon 9 rocket contributed to the mission success. The rocket carried a variety of small satellites for a diverse group of companies into low earth orbit.

The Transporter-3 mission was a dedicated rideshare mission.

Videos of the liftoff were shared online. Short clips of the rideshare deployment and the Falcon’s landing were also posted on Twitter.

SpaceX CEO Elon Musk announced that in 2021 the space company completed 31 diverse mission launches. And in 2020 they racked up 26 missions.

It was the 10th launch using the two-stage Falcon 9 spacecraft. And SpaceX claims that the miniaturized satellites will be used by future commercial and government enterprises including Microsats, CubeSats,  PocketQubes, and other orbital transfer vehicles.

The mission facilitated the delivery of 44 of Planet Labs Inc’s (NYSE: PL) small satellites into orbit. Co-founder and CEO Will Marshall tweeted last week that this latest Transporter-3 mission would fly the company’s 44 small satellites.

According to Teslarati, Planet Labs is a space imaging company that scans the planet Earth daily. And the company confirms that its latest SuperDove satellites will join 244 operational satellites already in orbit.

SpaceX’s unprecedented success is based on its development of reusable rockets. And the Falcon 9 is the world’s first orbital-class rocket able to fly multiple missions.

It has dramatically cut costs in the “space race.” And it allows SpaceX to use the most expensive parts of a rocket again-and-again. No other space company or country has, so far, developed this type of reusable rocket.