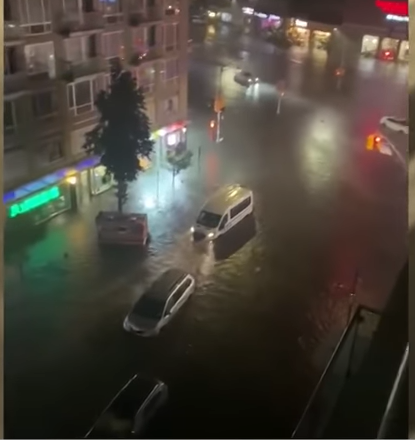 Hurricane Ida has been moving through the Northeast causing historic flooding. And the weather system was spinning destructive tornadoes in its wake.

Deadly flash flooding was triggered through the tri-state area.  It has been confirmed that at least 14 people in New York City and New Jersey have died. And the death toll is expected to rise.

Over six inches of rain fell in New York’s Central Park on Wednesday.

Montgomery County, Pennsylvania is reporting three storm-related deaths. And early Wednesday in Maryland one death resulted from floodwaters filling the bottom floor of an apartment building.

Infrastructure crumbles and people are trapped

The intense rain and flooding quickly overwhelmed the area’s major infrastructure. And roads were flooded, trapping drivers in their vehicles. The subways became underground rivers. And all transit was brought to a standstill.

Newark Liberty International Airport flooded and over 370 flights were canceled for Thursday.

The airport tweeted “The storm has passed but our crews are working diligently to clear residual flooding & return to normal.”

A video posted about 9:30 p.m. Wednesday by WABC-TV shows a baggage handling area still underwater. The air traffic control tower was also temporarily evacuated due to a tornado warning, local media reported. But workers have since returned.

The NJ Transit rail service, except the Atlantic City Rail Line, remains suspended on Thursday. And the Newark Light Rail is also suspended until flood damage can be cleared.

In the tri-area water quickly filled basements and ground levels. And a large number of people became trapped in their homes. Hundreds of water rescues and rooftop rescues took place in New York, New Jersey, Pennsylvania, and Maryland.

Many rivers were overflowing their banks. And the Schuylkill River, in Philadelphia, reached flood levels not recorded since 1902.

The system was filled with tornadoes that trapped people in their homes, uprooted trees, and downed power lines. Thousands of homes and businesses are still without power.

“We will use every resource at our disposal to ensure the safety of New Jerseyans,”  Governor Murphy tweeted. “Stay off the roads, stay home, and stay safe.”