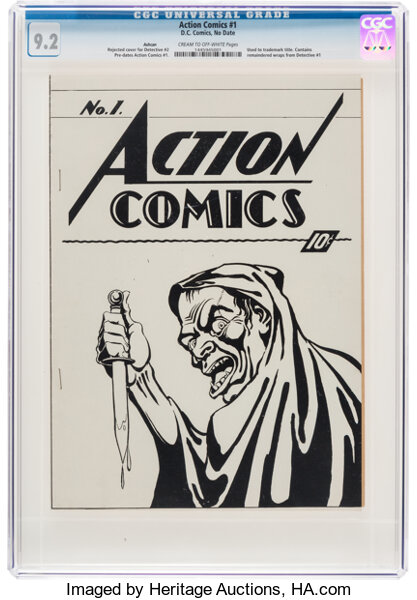 The Action Comics #1 Ashcan sold for $204,000 at an April 5th Heritage Auctions. When it was minted in 1937, DC publisher Harry Donenfeld claimed it would be “the most important comic book title ever published.”

It was over a year after the ashcan was trademarked that the June 1938 Action Comics #1 hit the newsstands. It sold for 10 cents a copy. And on the same day that the Ashcan was auctioned the original Superman comic was sold. One of only three known copies in existence was sold for $3.25 million.

This comic was produced by DC as the Action Comics ashcan. The ashcan was created to protect the name and concept from competing comic publishers. For a decade starting in the 1930s publishers of comics used “ashcans” to register trademarks.

They created these mock-ups of titles and logos that they were planning to publish. A copy of the ashcan was included with a trademark application to the U.S. Patent and Trademark Office. There were very few copies of ashcans made. And even fewer survived. This makes them the rarest comics in existence.

This ashcan was only one of three known copies. Another copy sold for $50,000 twelve years ago. And the last is housed in the DC Comics vaults.

Intriguingly, the Action Comics ashcan doesn’t have an image of Superman. Inside there are pages from Detective Comics. But it does have a unique cover of a ghoul holding a dripping knife. And the cover art was never used anywhere else.

In 1937, with no concept for the comic, Donenfeld feared that his beloved title would be taken. So he had four separate ashcans created to protect variations of the name he had chosen. In addition to Action Comics, he developed Action Funnies, Double Action Comics, and Triple Action Comics, as distinct trademarks.

According to the Heritage Auctions description detailing the item for sale: “The cover art by Craig Flessel is unique to this ashcan and had been originally slated to be the cover to Detective Comics #2, but editors Vin Sullivan and Whitney Ellsworth rejected it for being too gruesome. The interior contents are eight previously printed pages from Detective Comics #1.”

It was noted on the  Heritage Auction website that the book was in pristine condition. According to The Overstreet Comic Book Price Guide comic book historian, Gary Colabuono, owned this book, along with the Action Funnies ashcan. He obtained it directly from retired DC president, Sol Harrison, in 1986.