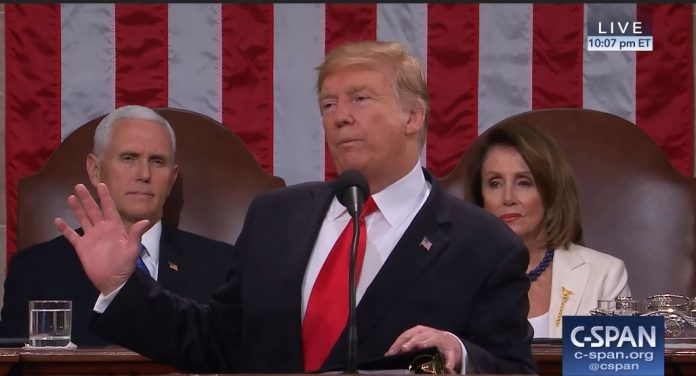 President Donald Trump condemned Senator Bernie Sanders, Representative Alexandria Ocacio-Cortez, and other politicians who are pushing for socialist policies such as the Medicare for All.

In his State of the Union address on Tuesday night, Trump said the United States of America will never become a socialist country like Venezuela. He noted that the once wealthiest Southern American country became impoverished because of the brutality and socialist policies of the Maduro regime.

“We stating with the Venezuelan people in their noble quest for freedom—and we condemn the brutality of the Maduro regime, whose socialist policies have turned that nation from being the wealthiest in South America into a state of abject poverty and despair,” said Trump.

He continued, “Here, in the United States, we are alarmed by new calls to adopt socialism in our country. America was founded on liberty and independence—not government coercion, domination, and control. We are born free, and we will stay free.”

Trump proclaimed, “Tonight, we renew our resolve that America will never be a socialist country.”

Sanders said America has “socialism for the rich”

In his rebuttal, Sanders said Americans are not truly free when they are in poverty and cannot afford the things they need such as food, medicine, and shelter.

Furthermore, Sanders quoted Martin Luther King Jr.’s statement in 1968, “This country has socialism for the rich and rugged individualism for the poor.” The senator pointed out that statement is true during that time and still true today, which is “absolutely unacceptable.”

On the other hand, Ocacio-Cortez commented that Trump is using socialism as a scare tactic. She said, “I think he’s scared. He sees that everything is closing in on him and he knows that he’s losing the battle on public opinion.

Meanwhile, Rep. Pramila Jayapal, the co-chairperson of the Progressive Caucus, said their legislative proposals such as the Medicare for All are not extreme. She noted that industrialized countries are implementing similar policies.

“I think he’s, you know, he’s worried about the good ideas like Medicare for all and taxes on the wealthiest and a green new deal and he wants to paint it as socialism… These are actually policies that every industrialized country in the world almost has instituted and built their societies on,” said Jayapal.