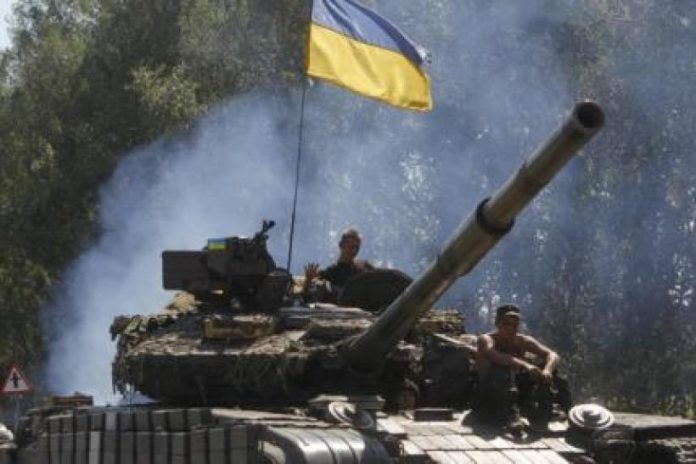 Speculation that Russian forces are collapsing in the East began with news that the occupied city of Izyum is once again under Ukrainian control.

Since the beginning of September Ukraine has been executing a multi-front counter-offensive using millions of dollars of weapons provided by the EU and the US.

Ukraine claims it successfully cut the main supply line to thousands of Russian troops near the Izyum.

According to the Wall Street Journal the collapse may have started with the capture of  Kupyansk last week.

The rapid advance across the occupied northeast has taken the Russian military by surprise. And a new phase in the more than six-month war is beginning.

By Friday Zelensky claimed Ukraine had retaken control of more than 30 towns and villages in the Kharkiv region. And they were reinforcing the gains with soldiers and equipment.

Ukrainian President Volodymyr Zelensky made an announcement on Saturday touting his military’s success in and around the Kharkiv Oblast region.

Zelensky says that since the start of September Ukrainian forces have retaken 2,000 square kilometers (770 square miles) from the Russians. To keep it in perspective that’s, double the land area they controlled on Thursday.

The Associated Press reports that Ukraine’s tactical surprise has Russia backing up. And British analysts were surprised at the “economy of force.” Russia did not attempt to defend the important strategic link.

Ukrainian Defense Minister Oleksii Reznikov reported to the Ukraine television channel that the Russians were left with no food or fuel for their area troops. And emphasized that Kyiv had cut off all Russian supply lines.

“It will be like an avalanche,” he said, predicting a Russian collapse. “One line of defense will shake, and it will fall.”

Ukrainian forces pushed even deeper into what has been Russian-controlled territory. And entered the Russian military stronghold of Izyum.

“Izyum was liberated today,” Mayor Valeriy Marchenko said. He was not yet back in the city himself but claimed to be in touch with the Izyum police. And said that emergency services were working to “clear the area of possible hazards before residents could return.”

The city of Izyum, is key.  Moscow had been using the area to launch new attacks on Ukrainian-controlled areas in the Donetsk region. Izyum was a major base for Russian forces in the Kharkiv region.

ISW reports significant numbers of Russian POWs are being transported out of the area. And estimates are that up to 20,000 Russian soldiers are stranded in the area.

Ukraine’s surprisingly quick advances prompted Russia to announce it was rushing reinforcements to Kharkiv. And Ukraine says it has control over the critical infrastructure of the area.

Russia’s Ministry of Defense confirmed Saturday that it had pulled its forces out of Izyum. In a statement, it presented the retreat as a preplanned effort. And said they intended to strengthen the Donetsk region.

This claim is similar to the justifications Russia gave for pulling its forces from the capital city Kyiv area earlier this year.