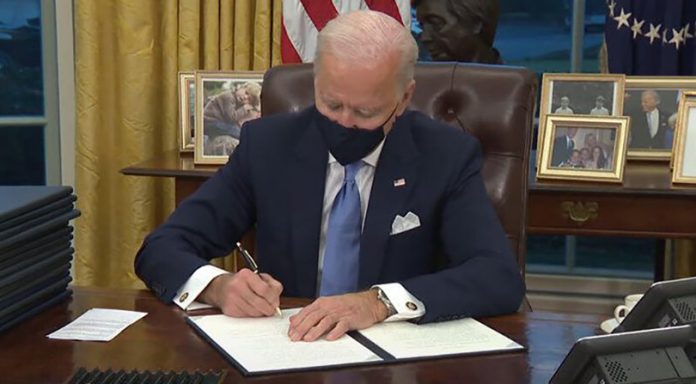 After a full week of being in office, President Joe Biden has already undone a slew of President Trump’s policies with Executive Orders.

President Biden has outdone himself, being both praised and criticized for the mountain of executive orders he’s been signing. For the first week, it seemed that every photo captured was with a pile of folders, as if needing to prove he was working.

Joe Biden's never-ending string of executive orders shows that we have given too much power to the Executive. It's time for the Congress and the States to reclaim our Constitutional powers.

Over 40 EO’s have been signed while the administration’s team has also called for unity and national healing. Unfortunately some of these Executive Orders are far from bringing the people together.

Although promised on the campaign trail, Biden has put the stimulus package for the American People on the back burner. The push back date was hazily reported to early March.

In addition, rollbacks on former President Trumps orders mandating companies pass on savings to patients for drugs such as Insulin and other maintenance drugs has been frozen, but plans to expand Medicare and Medicaid are now in place.

Biden pledged during the campaign to not ban fracking. An EO was signed promising to ban fracking via an order which prohibits new oil and gas leases on federal land. Federal agencies are now in control of the determinations regarding when and where to drill.

Decimating the XL Keystone Pipeline cost American jobs, as well as ruffled the feathers of our neighbors to the North. To the South, an order to stop funding and building of the border wall cost more jobs for the American people.  To top this, $4 Billion dollars was somehow put together and offered to the Central American Governments, while people in the United States are fighting to stay afloat and put food on the table.

Another EO is geared towards ‘Buying American’. Unfortunately, other EOs which cause America to be dependent on other countries for oil and manufacturing will increase the costs of those American manufactured items, making ‘Buying American’ out of reach for the majority of the nation currently out of work.

Granted, Biden has been in politics forever, so you can always find things he said in the past that he contradicts now

Like that time when he said that Executive Orders were only used by Dictators…Remember that?

Many President Trump supporters agreed with the idea of ensuring the safety and prosperity of America and its citizens before taking care of so many other countries. The voices of those supporters are now being silenced with the swipe of a pen. The agreement with this idea is not xenophobic or racist. Concerns with growing poverty and homelessness after the last 8 months of nationwide lockdowns, the increase in unemployment, and the politicizing of COVID has left the nation and her people unsettled to say the least.

President Biden is planning a new wave of executive orders and actions this week as he looks to further dismantle many of Trump's policies and address a slate of Democratic priorities as quickly as he can. https://t.co/MgZJHk6BG4

While several executive orders were called for by his base, such as those addressing racial and ethnic equity, and COVID response, much of the fine print expands government power and does little to imminently help U.S. citizens or correct the sources of these problems the common people face together.

Discomfort among State and House Representatives has risen as it seems this is a race to put into effect as many proclamations as possible to appease the left side of the aisle.

Update: This Admin has been in for 5 days and signed OVER 20 Executive Orders, undoing much of the progress the previous Admin made.

This is no way to govern.

President Biden should reconsider these power plays. It’s time for him work with Congress like he promised to do.

This is not a way to bring unity. Discussions among representatives and elected officials are necessary to close the gap of a nation torn.