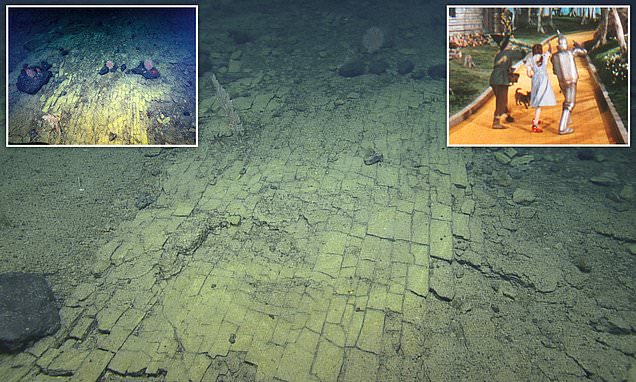 The crew of the Exploration Vessel Nautilus discovered some strange rock formations. And the deep-sea researchers compared it to the ‘yellow brick road’ in the classic film The Wizard of Oz.

Geologists and researchers spotted a strange formation that looks like a paved cobblestone road. It was found in the Papahānaumokuakea Marine National Monument (PMNM) off the coast of Hawaii.

The Nautilus is operated by a non-profit Ocean Exploration Trust. And video and livestream all the discoveries the remote-operated diving vehicles are able to film.

PMNM is one of the largest underwater conservation areas in the world. The massive area is bigger than every US national park combined. With the latest data, deep-sea researchers and geologists have still only explored 3% of its ocean floor.

Nautilus spent most of April 2022 studying the biological systems and geology of ‘seamounts.’  These are underwater mountains formed by once active volcanoes. The deep-sea mission also spotted the “yellow brick road’ formations.

Ocean Exploration Trust’s efforts were named Expedition NA138. And they had the charter to explore the PMNM. In the effort, they partnered with NOAA Ocean Exploration and the Office of National Marine Sanctuaries.

When the bizarre formation was shown on the video a researcher can be heard saying, “It’s the road to Atlantis.”

‘The yellow brick road?’ another adds. And a third team member calls the images ‘bizarre’ and ‘crazy’.

In a team report they claim ‘What may look like a “yellow brick road” is really an example of ancient active volcanic geology.

The team added in a statement: ‘At the summit of Nootka Seamount, the team spotted a “dried lakebed” formation, now identified as a fractured flow of hyaloclastite rock (a volcanic rock formed in high-energy eruptions where many rock fragments settle to the seabed).”

‘The unique 90-degree fractures are likely related to heating and cooling stress from multiple eruptions at this baked margin.”

‘Throughout the seamount chain, the team also sampled basalts coated with ferromanganese (iron-manganese) crusts from across different depths and oxygen saturations as well as an interesting-looking pumice rock that almost resembled a sponge,’ the statement said.

A Nautilus spokesperson added that ‘Our exploration of this never-before-surveyed area is helping researchers take a deeper look at life on and within the rocky slopes of these deep, ancient seamounts.”

‘These studies will help provide baseline information on the living communities of seamounts which can inform management and conservation measures.’