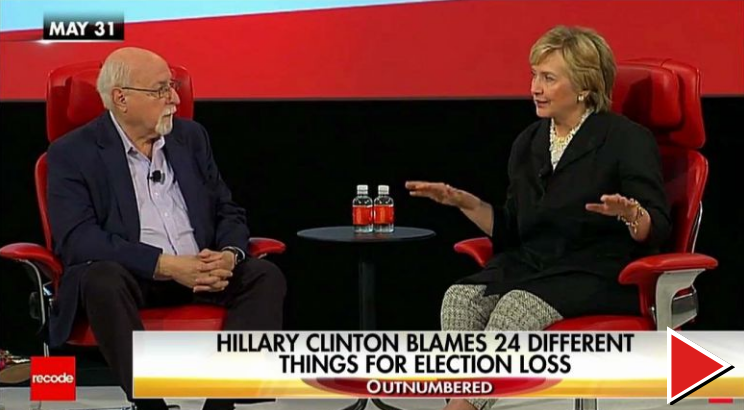 It is quite unfortunate that women like Hillary Clinton are still receiving media attention. Since her epic election loss to President Trump, Hillary has literally blamed everyone but the one responsible for her election loss. The list was so vast that Fox News Insider compiled a list. So far, Hillary has blamed Republicans, Democrats, Netflix, Twitter, Facebook, and many others for her failure to secure the White House. Her negligence to accept responsibility for her vanquishment is absolutely unbelievable. The truth of the matter is this: Hillary Clinton lost the 2016 Presidential election because her policies, likability, and track record were disgraceful.

At 69-years-old, Hillary Clinton should be mature enough to take accountability. Passing the buck and faulting the Russians, low information voters, and even Obama for her loss just speaks to how immature and out of touch she is with reality. It also reinforces her unfitness to hold public office. How has it not occurred to Hillary that perhaps she alone is to blame? Going into the race for the White House, she knew where she stood with the American people. She also knew that many people, even in her own party, loathed and viewed her as a criminal.

In fact, Hillary was so aware of her ranking with the American people that she was forced to cheat Bernie Sanders during the primary election with superdelegates. This was an act that secured the Democrat nomination, but contributed in her losing the election. In other words, she won the battle, but lost the war. Many Democrats truly loved Bernie and passionately supported him. They were disgusted with the underhanded methods employed by the DNC and Hillary to win the nomination. Many of these supporters went on to vote for Trump, just to spite their own party.

Ladies and gentlemen across America should view Hillary Clinton as the embodiment of what not to do and be. For starters, intimidating your husband’s rape victims is deplorable. Traumatizing a rape victim in court and then laughing about it on tape years later probably is not the best course of action; neither is deleting thousands of emails and then wiping the server with a cloth. At some point, our actions catch up with us, regardless of our level of infamy. Karma always finds those who are deserving of it. In Hillary’s case, her karma arrived in the form of losing an election that millions believed she would win. Apparently, she is still licking her wounds.

Ironically, Hillary Clinton’s failure to take responsibility for her actions is precisely what led to her downfall. She incorrectly assumed that being a woman would take her across the finish line. It is quite interesting that fellow Democrats and even former President Obama weren’t exempt from the list of people she blamed. Both parties passionately endorsed and campaigned for her, but when one is a career sociopath, none of these things matter. Hillary Clinton incorrectly believed that the White House was guaranteed to her. Months after her defeat, she is still seeking a scapegoat.