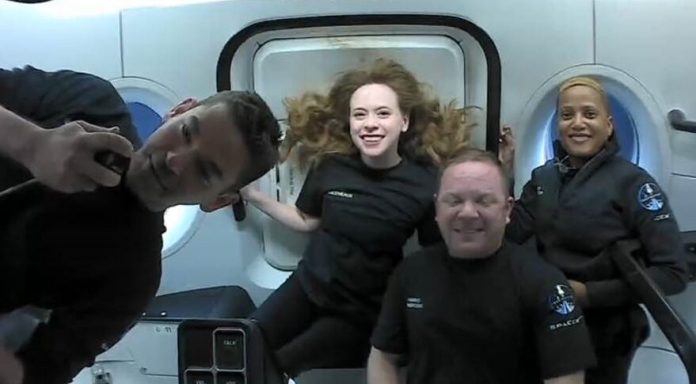 SpaceX’s Inspiration4 mission is a resounding success. The crew made up of all civilians had no space professionals on board. Jared Isaacman, Hayley Arceneaux, Dr. Sian Proctor, and Chris Sembroski all received only 6-months of training.

The capsule’s four main chutes opened as the Inspiration4 capsule made a perfect landing.  Splashdown took place in the Atlantic Ocean near the Florida coast on September 18.

Each of the four crew members represented Leadership, Hope, Generosity, and Prosperity.

They began their journey on September 15, from Hangar X at the Kennedy Space Centre in Florida.

The crew, launched by a Falcon rocket, rode in a modified Crew Dragon module during their 3-day mission. They were flying 360 miles above the Earth’s surface.

SpaceX CEO Elon Musk was on hand to see the crew off. And he monitored the mission closely. Musk was excited to see the launch. And was interested in the modifications he had suggested for the module.

Perhaps the most important change was the cupola. It was a giant dome window allowing the four SpaceX astronauts to have a panoramic view. SpaceX created the cupola dome in March. Musk said that it would give the crew a unique “in space feel.”

Although other civilians have traveled to space, the Inspiration4 is the first mission manned entirely by civilians.

The Inspiration4 team appeared on the NBC Monday morning Today Show, and Monday night on NBC News where they were interviewed. And they describe their experience as “awe-inspiring.” All four claim the trip to space left them with life-changing memories.

‘Our name is Inspiration,’ Proctor said. ‘To be able to capture that view and bring it back to Earth is special.’

Tech billionaire Isaacman is the CEO and founder of Shift4 Payments. He is funding SpaceX’s first private flight. Isaacman, the mission commander is an ‘accomplished jet pilot’ according to Inspiration4’s website.  He represents Leadership.

He is seeking to raise $200 million for St. Jude Children’s Hospital. So far, the Inspiration4 mission has commitments for over $160 million in donations. Isaacman is donating $100 million of his own money. After Inspiration4 landed, SpaceX CEO Musk tweeted that he would donate $50 million, too.

Arceneaux is a St. Jude’s Children’s Research Hospital physician assistant. And she was treated for bone cancer at 10 years old at the Memphis-based hospital. And she will be the first person in space with a prosthesis.

She represents Hope and believes that the mission will inspire people. ‘I’ve had some difficulties in life, but I think everyone has in some way,’ she said.

I think everyone has had to overcome something, and I just hope that people can look at my story and know that holding on to hope, that there will be better days, is so important,’ she added.

Space is for everyone

Dr. Proctor represents Prosperity. She makes history as the first black woman to pilot a spacecraft. In 2009 she was a finalist to become a NASA astronaut. But was not chosen. Her dad was an integral part of NASA’s Apollo team.

Besides being a licensed pilot, she is a professor, an artist, and an author.

‘It’s just amazing. This is the best way that I could ever imagine going to space with these individuals in this way with SpaceX. I’m thrilled.’ The talented Proctor said.

‘Each of us has been changed in a way that maybe we didn’t expect,’ said Sembroski, 41, who served as Mission Specialist and represents Generosity.

“And for me, it was being able to see the Earth in a way that made me realize there is so much to see in person that I need to go and find those places and explore more,” he added.

He says the mission proves that space can be accessible for all. The doorway is now open for civilians to fly through.