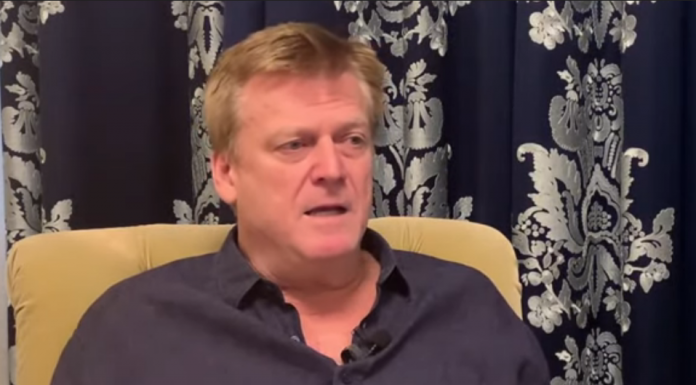 Patrick Byrne, the former CEO of Overstock.com, recently claimed irregularities in the 2020 presidential election and the voting machines are vulnerable to hacking. He also claimed that he bribed Hillary Clinton $18 million in 2016.

“This is in fact a slow coup,” Byrne said, accusing “foreign forces” that he claimed includes the Chinese Communist Party (CCP) having a hand in the 2020 presidential elections.

Bryne floated his allegations even on Twitter, where he put out dozens of videos pertaining to the alleged vulnerability of voting machines.

“They are gaslighting the American public,” he said. “They all know. It’s ridiculous. If we bend the knee to this, there’ll never be a free election in America.”

However,  the Department of Homeland Security’s (DHS) Cybersecurity and Infrastructure Security Agency (CISA), which oversees U.S. election security, refuted allegations of election fraud.  CISA assured Americans that the November 3 election was the “most secure in American history”

“There is no evidence that any voting system deleted or lost votes, changed votes, or was in any way compromised,” CISA said in a statement.

Byrne also accused the mainstream media of having this “snooty attitude for years.”

“Well, they have disgraced themselves by how they’ve handled what they’ve revealed themselves to be over recent years, but in particular in regard to this national emergency,” he added.

Byrne claims he facilitated an $18 million bribe to Hillary Clinton

The entrepreneur also claimed that he was complicit in facilitating a bribe for former Democratic presidential bet Hillary Clinton in the amount of $18M on behalf of the Federal Bureau of Investigation (FBI) on January 14, 2016. He said the FBI told him that Hillary took a $20 million bribe from Turkey and the bureau asked him to help take her down by facilitating a second bribe from a different foreign government.

He said, “I’ve been waiting to say this publicly. This is what really happened. I caused Hillary…I facilitated a bribe and she took a bribe for $18 million and I work with FBI as I did that. They were deeply involve in that.”

However, Byrne said, after three days the FBI told him to forget what happened because they believe Hillary will win the election and the “mission was scrapped from the highest level.”

FIND THE BEAUTY IN THE CHAOS: BYRNE, BERGY & HRC BOMBSHELL https://t.co/8nC0gw5zi9 via @YouTube

Last year, Byrne resigned as CEO of Overstock.com following comments alleging that the FBI directed him to pursue an intimate relationship with convicted Russian agent Maria Butina as an informant.

In December 2018, Butina pleaded guilty to acting as an unregistered foreign agent of the Russian state.

According to Time Magazine, Byrne “criticized the FBI, referring to a “deep state,” “men in black,” and “political espionage conducted against Hillary Clinton and Donald Trump,” after he said he consulted with billionaire Warren Buffet.”

Byrne bought Overstock in 1999 and developed it into a multi-million-dollar business, despite the growth of competitors like Amazon.