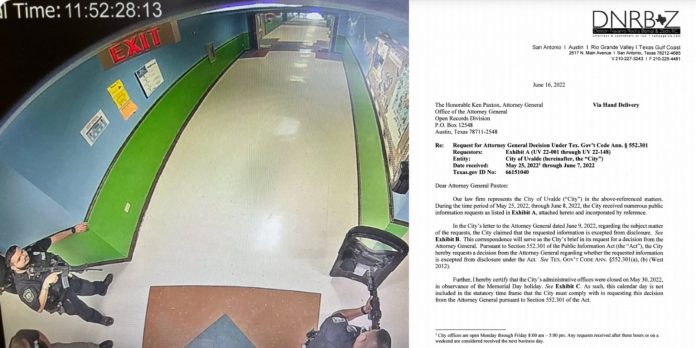 The City of Uvalde and the Uvalde police department are trying to avoid giving reporters information about last month’s deadly mass shooting at Robb Elementary School. This includes the 911 calls, bodycam footage, audios, calls, emails, text messages, and criminal records of the shooter.

Texas Attorney General Ken Paxton’s office is being asked to block the public release of all the information from the mass shooting at the Robb Elementary School massacre.

The City of Uvalde has hired the firm of Denton Navarro Rocha Bernal & Zech to keep from fulfilling the hundreds of public records requests pouring into the town.

The attorneys are arguing that the records being requested could be “highly embarrassing” and cause “emotional/mental distress.”

They also claim that records are “not of legitimate concern to the public.”

The Uvalde County District Attorney’s Office released a statement saying none of the bodycam or other records will be released until all the investigations are finalized. But it is now clear that the city and its police are attempting to permanently hide all records from the public.

And the Texas Department of Public Safety (DPS) has made a similar request.

Police Response is being investigated

Last month’s deadly shooting left twenty-one dead and 17 injured.19 of the victims were children. And two faculty members were killed.

The shooting took place over about 77-minutes from the first 911 call till the police announced the suspect had been killed.

Uvalde police stayed outside the Robb Elementary School classroom while an 18-year-old shooter went on a deadly rampage. The mass shooter was finally killed by a Border Patrol agent who had ignored police commands and stormed the building.

Multiple news agencies’ videos show a scene where over 50 officers from at least 3 agencies mill around the scene. Shooting is still going on and parents are trying to get to their children. Most of the police seem to be holding parents back.

In some cases, parents were pinned to the ground until they calmed down. And others say they were threatened with tasers or handcuffed.

The last 911 call from a child locked in a room with the killer was at 12:15. Police from various agencies had been at the school since around 11:30.

An off-duty cop whose wife was a teacher and had children in the school went into the school and evacuated some classrooms and rescued his children.

Uvalde mom, Angeli Rose Gomez was initially stopped by police. She begged for help since her children were inside the besieged school. And Gomez eventually broke free of the police, entered the school, and was able to get her kids out.

Survivors have also given highly uncomplimentary reports of the police response.

The DPS formally requested Paxton’s office block the public release of bodycam videos from the deadly shooting. The DPS claims the footage is “confidential” and could give future shooters “invaluable information” about police investigations and tactics.

“Knowing the intelligence and response capabilities of Department personnel and where those employees focus their attention will compromise law enforcement purposes by enabling criminals to anticipate weakness in law enforcement procedures and alter their methods of operation to avoid detection and apprehension,” the DPS letter to Paxton stated.

The Texas Attorney General will determine if the City of Uvalde and the DPS have valid requests. Paxton will review all the evidence and decide which, if any, of the public records must be made available to the public.