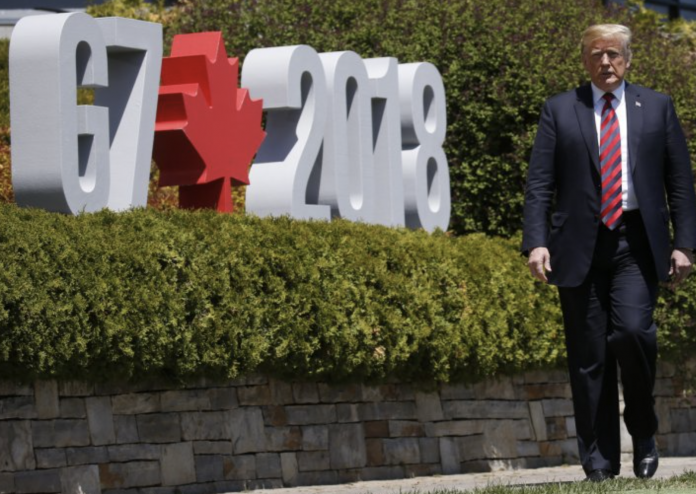 Over the weekend, President Trump convened with other world leaders for the G-7 summit. However, during a press conference, the Commander-in-Chief slammed CNN as “fake news,” according to The Hill.

An Overview of the Question and President Trump’s Answer

The 45th President has maintained a troubled relationship with American press virtually since the inception of his entry into the 2016 election. The nature of the aforementioned relationship has not changed in nearly two years. During the highly anticipated and widely discussed G-7 summit, President Trump took part in a press conference.

At one point, a reporter asked the President about his relationship with other world leaders, particularly the leaders of Canada, Germany, and France. This question comes after controversy regarding Trump’s latest implementation of tariffs on aluminum and steel. The President’s political adversaries have moreover accused him of alienating U.S. allies and cozying up to foes.

However, according to Trump, his relationships with the other world leaders at the G-7 summit couldn’t be better. Before answering the reporter’s questions, the President inquired about which network the reporter worked for.

After learning of the reporter’s affliation with CNN, Trump said “Fake News CNN; the worst.”

The President then expressed that his relationships with other world leaders are “a 10.” His statements read as follows:

The reporter’s question came as an apparent followup to concerns regarding the President’s aforementioned tariffs on Mexico, Canada, and the European Union.

The rhetoric of the sitting President is inherently polarizing in today’s political climate. Trump’s supporters overwhelming laud his outspoken nature and words, while critics blast him as unprofessional and unpresidential. His statements to the CNN reporter during yesterday’s press conference are no exception.

Americans on both sides of the aisle have subsequently weighed in with their thoughts:

“Accuse the media of being fake news, then proceed to spew fake news.”