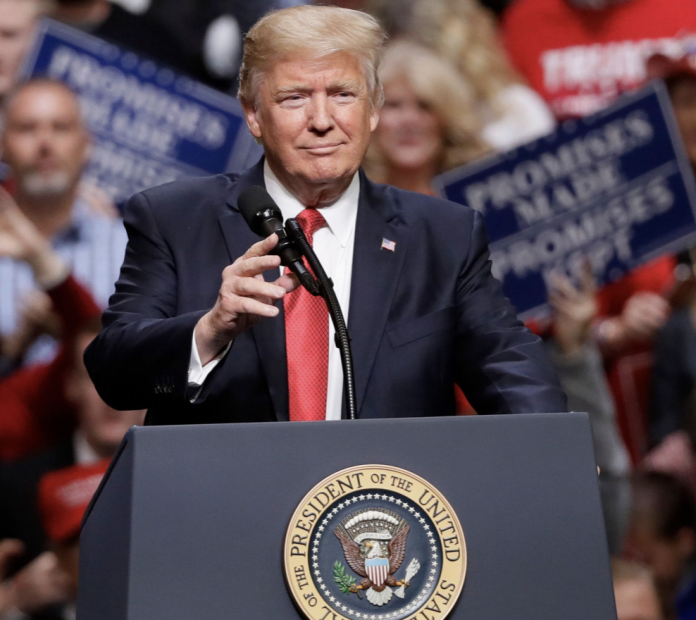 On Saturday, President Trump traveled to Wisconsin and held a rally with his supporters. During his time at the rally, the commander-in-chief discussed a critical matter which pertains to illegal immigration.

During his time with Wisconsin supporters, Trump confirmed that illegal immigrants will be transported to sanctuary cities. This is something which the president has previously discussed amidst reports of trouble at the Southern border; the issues which Trump has experienced with Democrats who tried to fight him on building his promised border wall also plays a role.

The president reminded supporters of his decree with the following statements:

“Last month alone, 100,000 illegal immigrants arrived at our borders, placing a massive strain on communities and schools and hospitals and public resources like nobody’s ever seen before. Now we’re sending many of them to sanctuary cities. Thank you very much. They’re not too happy about it. I’m proud to tell you that was actually my sick idea.”

Trump continued, noting the sympathies which Democrats regularly express towards the plights of people who enter the country illegally.

Just out: The USA has the absolute legal right to have apprehended illegal immigrants transferred to Sanctuary Cities. We hereby demand that they be taken care of at the highest level, especially by the State of California, which is well known or its poor management & high taxes!

However, many on the right wing questioned the criticism against this decision. If Democrats are truly as supportive of illegal immigrants as they claim, they ought to welcome the latter’s presence in sanctuary cities. After all, sanctuary cities are, by definition, designed to serve as safe havens to protect individuals who unlawfully enter America.

Various Border Patrol officials have repeatedly noted the strain which rampant illegal immigration places on their resources. This strain is the source which prompted President Trump to declare a national emergency at the Southern border earlier this year.

Despite feedback from Border Patrol officials, Democrats continue to question the existential crisis at the Southern border.