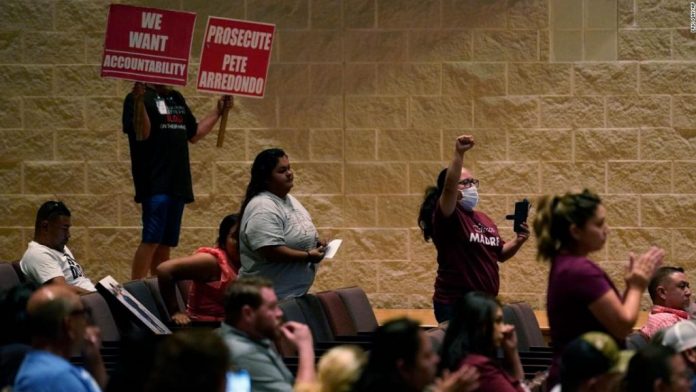 Uvalde parents have been excluded from the investigations of the 23 responding agencies of the Robb Elementary School on May 24th. And they say that it’s time for law enforcement and local officials to start to take accountability.

The emotional families at Monday’s meeting of the Uvalde Consolidated Independent School District board demanded that CISD Police Chief Pete Arredondo be fired.

No one is calling on them to testify. And many of them were outside the school begging the police to confront the shooter or to let them inside the school to save their children.

On Sunday, the day before the CISD meeting the Texas House committee released its 77-page report of the investigation of the law enforcement response to the school shooting.

According to local news outlet KVUE in Houston, the report details how the massive multi-agency response was slow, uncoordinated, and ultimately cost lives.

Hallway and body camera video was hard to watch. It showed over 70 members of law enforcement inside the school milling around for over an hour while students and teachers were being massacred at the end of the hallway.

The report provided the following breakdown of the agencies who responded to the shooting and the number of officers who responded.

According to KVUE, only 2 law enforcement officers are on administrative leave due to the shooting.

Two UPD officers have left the force. No one has confirmed if the resignations were related to the shooting.

Uvalde CISD Police Chief Pete Arredondo was in charge of the school police on the day of the shootings. He was placed on administrative leave last month. And the families of the Uvalde victims are demanding he is fired.

At Monday’s meeting, the parents were demanding that Arredondo be fired. And saying that he should be the first to go, but not the last.

They are frustrated and impatient. The townspeople have been told to let the investigations play out. And they haven’t been allowed inside the rooms where the investigators are doing their work. So, at the CISD meeting, they ask the school administrators “’Are you going to make this right?’ And they call for resignations and terminations inside the school district. “You need to clean the house” one parent called out to applause and shouts.

The Texas House report claimed that Arredondo was the on-site incident commander. And he is heavily criticized for all of law enforcement’s disastrous response.  He said in an interview with the Texas Tribune that he was not in charge.

Arredondo, 50, was head of the six-member school police force. Although the CISD is responsible for keeping Uvalde schools safe, there were a myriad of other police agencies present that day at Robb Elementary. Arredondo has been singled out and some say is the scapegoat for all police and state officials.

In the grief-stricken Texas town, the families are angry that it took authorities more than an hour to breach the classroom and kill the gunman. But they are also upset because they have been largely excluded from the investigations of the police response.

“There is an anxiousness in my heart that is only worsened by the fear my children have,” said Rachel Martinez, a parent of four children. “I think no one person here today can deny there was a massive failure on May 24. Where these failures lie is the question.”