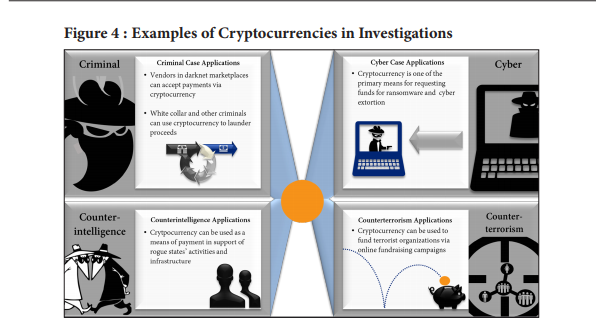 The U.S. Department of Justice (DOJ) released the “Cryptocurrency Enforcement Framework” highlighting the emerging threats associated with the frequent and increasing use of digital assets or virtual currencies.

The framework also provides insights regarding the important relationships of regulatory agencies in the United States and around the world as well as the enforcement challenges they face associated with cryptocurrencies.

This 2020, the Justice Department, the Securities and Exchange Commission (SEC), the Commodity Futures Trading Commission (CFTC), and other federal and state regulators have been very busy investigating an bringing enforcement actions against individuals and entities using bitcoin and other cryptocurrencies in illegal activities.

The DOJ’s Cyber-Digital Task Force was responsible for producing the Cryptocurrency Enforcement Framework.

In 2018, then U.S. Attorney General Jeff Sessions established the Task Force to assess the latest technological advances and its impact on law enforcement. Later that year, the Task Force released a  comprehensive report about the existing threats confronting our society ranging from criminal enterprises’ cyber-enabled schemes to efforts to compromise the United States’ critical infrastructure. The Task Force also identified emergency threats posed by cryptocurrencies since malicious actors are using such assets.

The Task Force produced the Cryptocurrency Enforcement Framework to provide a coherent guideline for those who want to understand the priorities of federal regulators’ enforcement in the cryptocurrency industry.

The Cryptocurrency Enforcement Framework is an 83-page report that begins with the history of “virtual currency” and the potential for abuse. It then acknowledges that these assets are vital to the U.S. and its allies.

“Innovation can drive society forward. But innovation does not occur in a vacuum. Public policy can establish background conditions that help the innovative spirit thrive—or create an environment in which that spirit is inhibited, or suppressed.”

The Task Force noted that the existence of cryptocurrency is “relatively brief” but it already “plays a role in many of the most significant criminal and national security threats” confronting the United States.

According to the Task Force, the illegal uses of cryptocurrency fall under three categories:

The government has tools to combat the illegal use of cryptocurrencies

The report also highlighted the fact the society and the government art powerless to address the threats associated with the illegal use of cryptocurrencies.

“The government has legal and regulatory tools available at its disposal to confront the threats…The Department of Justice has built strong working relationships with its regulatory and enforcement partners” including the SEC, the CFTC, and other federal agencies.

The Task Force noted that regulators have been successful in arresting and prosecuting criminals including the operator of the world’s largest online child sexual exploitation market. Regulators also rescued more than 20 child victims; seized hundreds of thousands of dollars’ worth of bitcoin, the largest-ever seizure of cryptocurrency in the terrorism context, and dismantled terrorist financing campaigns, and many other successful enforcement actions involving the unlawful use of cryptocurrencies.

Cryptocurrency is vital but those using it must follow the law

Attorney General Barr summarized the Cryptocurrency Enforcement Framework by emphasizing that cryptocurrencies are important to the U.S. and its allies and we should continue to make sure its use does not endanger the safety and security of the public and the nation.

Barr said, “Cryptocurrency is a technology that could fundamentally transform how human beings interact, and how we organize society.  Ensuring that use of this technology is safe, and does not imperil our public safety or our national security, is vitally important to America and its allies.”

On the other hand, the Federal Bureau of Investigation (FBI) Director Christopher Wray noted that they witness how criminals pose dangers to our society by using cryptocurrency to advance their illegal activities.

Wray said, “As this Enforcement Framework describes, we see criminals using cryptocurrency to try to prevent us from ‘following the money’ across a wide range of investigations, as well as to trade in illicit goods like criminal tools on the dark web. For example, the cybercriminals behind ransomware attacks often use cryptocurrency to try to hide their true identities when acquiring malware and infrastructure and receiving ransom payments.

John C. Demers, Assistant Attorney General for the National Security Division and a member of the Task Force said, “As the Cryptocurrency Enforcement Framework explains, we will adapt our strategy and tools to 21st-century financing, including to combat the use of cryptocurrencies to evade enforcement and harm our national security.”

Brian C. Rabbitt, the Acting Assistant Attorney General for the Criminal Division and a Tas Force member said, “Cryptocurrencies and distributed ledger technology present tremendous promise for the future, but it is critical that these important innovations follow the law…We will not hesitate to enforce the laws that govern these technologies when necessary to protect the public.”