Home America Omar to Pelosi: “We Never Need to Ask for Permission!”
SHARE 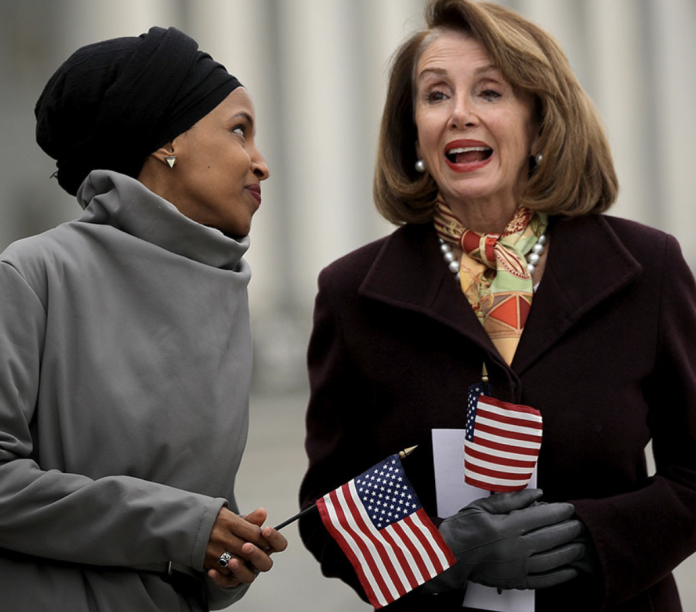 Various freshmen House Democrats are in a feud with Speaker Nancy Pelosi. The congresswomen in question include Reps. Alexandria Ocasio-Cortez, Ilhan Omar, Ayanna Pressley, and Rashida Tlaib. Recently, Pelosi criticized the manner in which these caucus members handle themselves, especially via Twitter.

This is something which the congresswomen have taken issue with; last week, Ocasio-Cortez landed in hot water after branding Nancy Pelosi as a racist with issues towards “women of color.” Many Democrats who have known and worked with Pelosi for years rushed to the Speaker’s defense and slammed Ocasio-Cortez.

Next to respond to Pelosi is Omar who shared her thoughts with a progressive crowd on Saturday.

What Omar Thinks of Pelosi’s Criticism

While speaking to progressives, Omar stated that each individual has a “role.” The congresswoman also asserted that she and other members of the House don’t need to ask Pelosi’s “permission” in order to speak out or partake in political grandstanding. During these remarks, Reps. Ayanna Pressley and Rashida Tlaib flanked Omar.

In Omar’s own words:

“We recognize every single person has a role. Our role is to take our votes. Leadership’s role is to wrangle votes and so if everybody understands what their role is, then everybody succeeds. […] We are not really in the business of asking for the share of that power. We are in the business of trying to grab that power and return it to the people.”

The congresswoman also lamented over the “struggle, often times, with people who have power about sharing that power.” This statement presumably pertained to Nancy Pelosi.

Despite censure from Speaker Pelosi, Omar has continued to engage in her Twitter habits. The congresswoman briefly sparred with President Trump after he stated that Omar shouldn’t be in office if “one-half” of the statements about her are accurate. Interestingly enough, Trump made this statement after defending Nancy Pelosi from accusations of racism.

Trump defends Pelosi and the. takes on AOC and Ilhan Omar. pic.twitter.com/SsyR1G4ZCv

Omar then responded in the following tweet, claiming that Trump shouldn’t serve in the White House if “one-tenth” of claims about him are accurate:

If one-tenth of what they say about you is true, you shouldn’t be in office… next 💁🏽‍♀️ https://t.co/zI9T9nyZ6I

The House Speaker has also not publically responded to Omar’s statements.