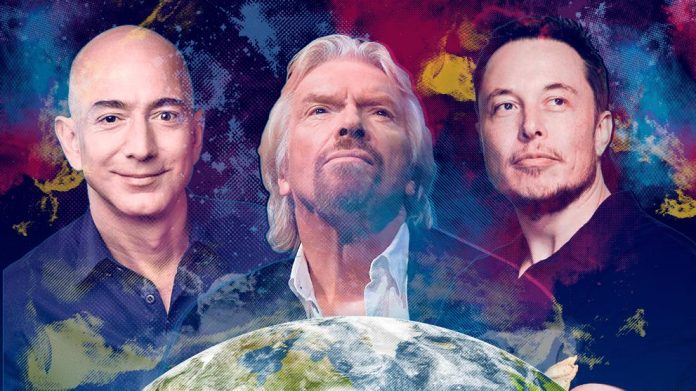 Billionaire CEO Richard Branson’s team is planning on launching a historic flight on their VSS Unity spacecraft.  And Virgin Galactic is getting a lot of attention to his space flight. But half the fun may be beating Bezos into space. So the billionaire space race continues.

Stephen Colbert is hosting a Livestream, and Khalid will be introducing a brand-new song to launch the flight.

The billionaire space race is “on.” First, Amazon billionaire Bezos announced that on July 20th his company Blue Origin was launching an 11-minute rocket-ride into low orbit space. And he planned to be an onboard passenger on his suborbital New Shepard system flight.

Then Branson announced that he will take flight on Virgin’s high-powered plane 9 days before Bezos can get off the ground. And he plans on being on that “high-altitude airplane” in person.

On Friday, Bezos took to Twitter. His complaint was that Branson wasn’t flying high enough to make it into space. Is 80km really space? Jeff Bezos says Virgin Galactic’s flights are not going into space according to international standards. And that “space begins 100 km up at the internationally recognized Kármán line.”

According to one of his tweets:

“Only 4% of the world recognizes a lower limit of 80 km or 50 miles as the beginning of space. New Shepard flies above both boundaries. One of the many benefits of flying with Blue Origin.”

In another tweet, he compared his Blue Origin to Virgin Galactic. And in his view, Blue Origin was definitely better.

From the beginning, New Shepard was designed to fly above the Kármán line so none of our astronauts have an asterisk next to their name. For 96% of the world’s population, space begins 100 km up at the internationally recognized Kármán line. pic.twitter.com/QRoufBIrUJ

The comparison sounds good. But keep in mind that Virgin Galactic has flown humans to space on three occasions. SpaceX Elon Musk is years ahead of them both in space accomplishments. And Bezos is still a “space virgin.”

How high should they go?

Bezos’ tweet may be a little misleading about the 100 km space boundary, as well. Both the US Air Force and the US Federal Aviation Administration have designated 80 km as the space boundary.

And although the World Air Sports Federation (FAI) still uses 100 km as the demarcation line, there is a move to lower it to 80 km, due to “recently published analyses that present a compelling scientific case for reduction in this altitude.” according to the Harvard-Smithsonian Center for Astrophysics scientist Jonathan McDowell.

On June 11th you can watch the Virgin Galactic Livestream, at 7 am CST on Sunday morning.

In 2014, successful SpaceX entrepreneur, Elon Musk claimed that he doubted that Bezos would achieve a spaceflight by 2019. And that, “Frankly, I think we are more likely to discover unicorns dancing in the flame duct.” He was right about the Bezos timeline. On July 20, 2021, we will find out if those unicorns are still dancing!