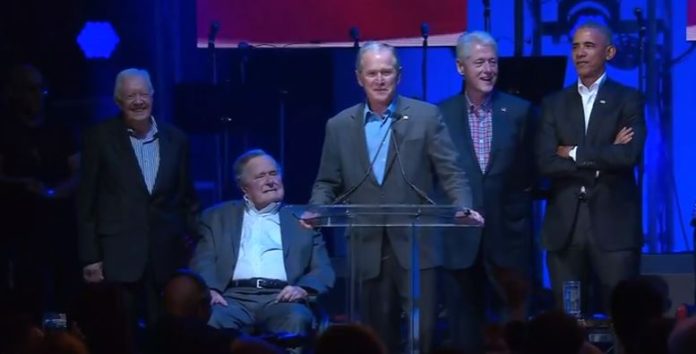 The former living U.S. Presidents raised $31 million for the victims of the hurricanes at benefit concert on Saturday night.

Last month, the five Presidents launched the One America Appeal. They asked their fellow Americans to help the hurricane victims in Texas, Florida and the Caribbean to recover and rebuild.

The One America Appeal concert was the idea of President George H.W. Bush. He turned the 20th anniversary of the Bush Library and Foundation and Bush School of Government and Public Service as an opportunity to raise money for the victims of the recent hurricanes.

The event featured the music band Alabama together with musicians Lyle Lovett, Robert Earl Keen, and the Gatlin Brothers. Lady Gaga made an unbilled appearance. It was held at the Texas A&M’s Reed Arena in the College Station.

Message from the former Presidents at One America Appeal concert

Pres. George H.W. Bush said, “It’s important that those affected by these devastating storms know that even if the path to recovery feels like a road that goes on forever, we’re with them for the long haul.”

His son, Pres. George W. Bush said, “I too am here to give to this fine fund, and I want to thank all the volunteers, but I’m here for another reason. I speak for the folks right here when I say, ‘we really admire and love George H.W. Bush.”

Pres. Carter told the audience that American is known for volunteer work. He noted that 67 million Americans volunteered to help other people in the country last year. He added that Habitat for Humanity pledged to build 6,000 homes across the states impacted by the hurricanes. According to him, the non-profit organization already raised $20 million of the needed $100 million. He has been working with Habitat for Humanity for 36 years.

Pres. Clinton noted that volunteering in America started before the founding of the United States. He told the audience that Benjamin Franklin organized the first volunteer fire department in Philadelphia.

Clinton said, “We’ve been volunteering since before our Constitution…Our neighbors, our friends, have got an enormous amount of ‘sweat equity’ from all these volunteers, and a lot of money.” He added that the hurricane victims “have only begun to dig their way out of what could be still a calamitous disaster…but can be a new beginning.”

Pres. Obama praised his fellow Americans who are helping in the recovery efforts of the impacted regions. He praised and thanked the elder Bush and First Lady Barbara for setting good example for everyone. Obama added that amid the heartbreaking tragedies we’ve seen “ordinary people step up and do extraordinary things. He said that is the “spirit of America at its best.”

Trump sent a video message to the benefit concert

President Donald Trump did not attend the benefit concert but he sent a video message, which was played at the event.

In the video, Trump said, “This wonderful effort reminds us that we truly are one nation under God, all unified by our values and our devotion to one another.

“I also want to thank every person, including everyone here tonight, who has contributed to this vital effort,” he added.